Mosque’s muezzin, who calls others to prayers, said to have been stabbed in neck 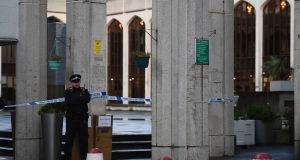 Scotland Yard has launched an investigation into attempted murder after a man was stabbed at a mosque during afternoon prayers.

The mosque’s muezzin, who calls others to prayers, was said to have been stabbed in the neck, according to one witness who posted a video showing the alleged attacker being detained by police at London Central Mosque in Regent’s Park.

The Metropolitan police confirmed the injured man was aged in his 70s. He has been assessed in hospital after being treated by paramedics at the scene and his condition is not life-threatening.

A man was arrested on suspicion of attempted murder, police said.

A Twitter user posted footage of a white man wearing a red top and jeans, sitting crossed-legged in the mosque, apparently being held in cuffs behind his back by a police officer.

The Twitter user said the victim had been taken to hospital after being “stabbed in the neck” during prayers.

Other images posted on social media showed the alleged attacker, who was barefoot, being pinned to the floor of the mosque by police officers as worshippers looked on. In one video, a knife was seen on the floor under a plastic chair.

A Met spokesman said police were called to reports of a stabbing at the Park Road mosque at 3.10pm on Thursday. “Officers attended along with paramedics from the London ambulance service. A man was found with stab injuries.

“He was treated by paramedics before being taken to hospital. A man was arrested at the scene on suspicion of attempted murder. A crime scene has been put in place. Inquiries continue.”

Police said the incident was not being treated as terror-related.

The ambulance service said the victim had been taken to a major trauma centre. The service tweeted: “We sent an ambulance crew, a paramedic in a car and an advanced paramedic practitioner to this incident in Regent’s Park.

“We treated a man at the scene and took him to a major trauma centre.”

In response to the attack, UK prime minister Boris Johnson tweeted: “I’m deeply saddened to hear of the attack at the London Central Mosque. It’s so awful that this should happen, especially in a place of worship. My thoughts are with the victim and all those affected.”

Mayor of London Sadiq Khan said police would be providing extra resources, writing on Twitter: “I’m deeply concerned by this incident at London Central Mosque. Every Londoner is entitled to feel safe in their place of worship & I want to reassure London’s communities that acts of violence in our city will not be tolerated. – Guardian/PA