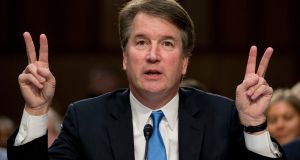 US supreme court nominee Brett Kavanaugh faced tough questions about his views on abortion in his third full day in front of members of the senate judiciary committee. Mr Kavanaugh, who was nominated by President Donald Trump to replace Justice Anthony Kennedy on the US supreme court in July, was questioned by senators from both parties ahead of a vote on his nomination later this month.

Controversy erupted in the committee room after Democrats threatened to release documents relating to Mr Kavanaugh that had been deemed confidential by the committee. Media outlets also reported the content of some of the documents ahead of the hearings.

Crucially, this included a document that shed light on the judge’s thinking on Roe v Wade, the landmark supreme court decision in 1973 legalising abortion. According to a 2003 email, Mr Kavanaugh wrote that he was not sure “all legal scholars refer to Roe as the settled law of the land”, noting that the supreme court “can always overrule its precedent”.

But under questioning by Senator Dianne Feinstein of California, Mr Kavanaugh said he had not been expressing his own views, but rather those of legal scholars. Mr Trump previously said he would only appoint supreme court justices who would overrule Roe v Wade.

Republican senator John Cornyn of Texas warned Democratic senator Cory Booker, who had threatened to release further memos, that releasing confidential documents would be “irresponsible and dangerous”. “No senator deserves to sit on this committee or serve in the senate if they decide to be a law on to themselves, and willingly flout the rules of the senate,” he said.

Hints about the content of other documents were suggested by Democratic senator Kamala Harris late on Wednesday, when she asked Mr Kavanaugh if he had ever met with anyone from the law firm Kasowitz Benson Torres, a firm that counts Donald Trump’s longtime personal lawyer Marc Kasowitz as a partner. Mr Kavanaugh asked Senator Harris to disclose the person she was thinking of, but she replied: “I think you’re thinking of someone and you don’t want to tell us.”

The issue was raised again by Republican senator Orrin Hatch on Thursday and Mr Kavanaugh said he had not spoken about the Mueller investigation with anyone, including anyone from that law firm.

“I haven’t had any inappropriate conversations about that investigation with anyone. I’ve never given anyone any hints, forecasts, previews, winks – nothing – about my view as a judge or how I would rule as a judge on that or anything related to that,” Mr Kavanaugh said.

Critics of Mr Kavanaugh have raised concerns about previous statements by the circuit court judge where he suggested that presidents should be immune from prosecution while in office – an issue that could surface during the Trump presidency if the House of Representatives decides to start impeachment proceedings.

With Republicans controlling the senate, Mr Kavanaugh is widely expected to be endorsed by the judiciary committee and full senate. If appointed, he will be the second supreme court justice to have been appointed by Donald Trump.