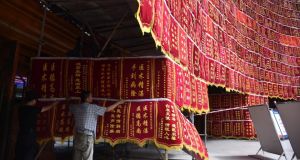 It’s a humid yet clear day in Beijing, and outside the Capital Children’s Hospital, on the west side of the elegant Ritan Park, traffic is intense and mothers carrying babies weave through honking cars to get to the entrance.

Inside, the admissions area is packed like a train station at Chinese New Year, with anxious parents and small children milling around as they take a ticket before queuing up at rows of counters.

Many are here to get fresh jabs against common childhood illnesses. Some are opting for re-vaccinations after confidence in the country’s health system was shaken by the discovery that vaccines to protect children against whooping cough, diphtheria and tetanus were faulty.

When Zhou Bingyou (32), a teacher with a two-year-old daughter, heard of the scandal, she checked her daughter’s vaccination book and was horrified to find the drugs were from one of the companies accused of producing the faulty vaccines, Changsheng Biotechnology.

“I started to sweat. Once I looked more closely, I was relieved Meiqi [her daughter] had not had the problem vaccine, but I had to decide if she should have a scheduled follow-up injection the following week,” said Zhou.

“In the end, we decided to use an imported vaccine even though it was expensive – 800 yuan (€101) for one shot. But it is safe. The vaccine news was scary,” she said.

There was huge anger online about the scandal, with one Sina Weibo user saying everyone involved should be shot dead, and calls for greater public accountability. The mayor of the city where the vaccine manufacturer was based, Changchun, has resigned.

Ten years ago, infant formula in China was found to have been adulterated with melamine, a type of resin. Six babies died and tens of thousands were hospitalised, and despite the lapse of time since that scandal, people remain fearful.

Zhang Meijia from Shanghai has a three-year-old daughter with leukaemia. “When I saw the fake vaccine news, I was heartbroken and can’t imagine why our government didn’t control these things which affect the life of the kids, not only mine,” she said.

The vaccine scandal is emblematic of a broader problem about the health system. An ageing population and air pollution have led to a rise in demand for hospital services and many believe the whole system is in need of reform.

I don’t trust private hospitals, but for the public hospitals you need to have money, but also the connections, otherwise you can’t even get a bed if you need it

China has 29,000 hospitals, of which 13,000 are public and 16,000 are private. Public hospitals tend to be much bigger and far busier – in 2016, public hospitals had 2.5 billion patient visits compared to 360 billion visits at private hospitals, according to National Bureau of Statistics data.

People prefer the public hospitals as there is a perception the staff and facilities are better.

At the same time, the number of public hospitals is falling, largely because many are being

reconstituted with private capital investment. Yet widespread mistrust of the private hospitals remains.

The difference is often cosmetic. During a minor eye operation, I was admitted to the luxurious private wing of a large public hospital, but when the time came to do the procedure, it was performed in the public hospital area.

The government has increased spending on healthcare steadily since it launched a major reform package in 2009. “There has been progress on the public health front. In broader terms, however, there is not much to brag about,” said Huang Yanzhong, an adjunct senior fellow for global health at the Council on Foreign Relations. The key to healthcare reform is reform of the public hospitals, and reform in this area has been sluggish, in part because of vested interests.

“How to reform the sector to make it more competitive is to reduce the share of the public sector. More than half the hospitals are non-public, but in terms of hospital beds, 80 to 90 per cent are in public hospitals. In China the public sector is dominant,” said Huang.