‘He’s an idiot’, ‘We’re in crazytown’ and other key extracts from Woodward’s Trump book 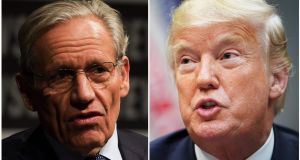 Mr Trump and other officials have denied some accounts.

Here are some of the most explosive passages from Fear: Trump in the White House:

- White House chief of staff John Kelly on working for Mr Trump: “He’s an idiot. It’s pointless to try to convince him of anything. He’s gone off the rails. We’re in crazytown.”

- Mr Trump on attorney general Jeff Sessions: “This guy is mentally retarded. He’s this dumb southerner. How in the world was I ever persuaded to pick him for my attorney general? He couldn’t even be a one-person country lawyer down in Alabama. What business does he have being attorney general?”

- The president after making a speech condemning white supremacists over violence in Charlottesville: “That was the biggest f****** mistake I’ve made. You never make those concessions. You never apologise. I didn’t do anything wrong in the first place. Why look weak?”

- Mr Trump to former director of the National Economic Council Gary Cohn when he tried to resign after Charlottesville: “This is treason.”

- Mr Trump after Twitter doubled its character count for a single tweet from 140 to 280: “It’s a good thing, but it’s a bit of a shame because I was the Ernest Hemingway of 140 characters.”

- The president on his nickname for North Korean leader Kim Jong Un: “Little Rocket Man. I think that may be my best ever, best nickname ever.”

- Ivanka Trump, when told she was a “staffer” by Steve Bannon: “I’m not a staffer! I’ll never be a staffer. I’m the first daughter and I’m never going to be a staffer.”

- Deputy chief of staff Zach Fuentes on Mr Kelly: “He’s not a detail guy. Never put more than one page in front of him.”