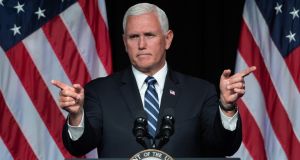 US vice-president Mike Pence speaks about the creation of a new branch of the military, Space Force, at the Pentagon. Photograph: Saul Loeb/Getty Images

A bombshell newspaper essay which detailed efforts to sideline Donald Trump from government was “just an obvious attempt to distract attention from this booming economy and [the president’s] record of success”, vice-president Mike Pence has said.

Speaking to CBS’s Face the Nation in an interview to be broadcast in full on Sunday, Mr Pence also denied that White House officials had discussed invoking the 25th amendment and removing Trump from power.

The comment piece was published by the New York Times on Wednesday, under the title “I Am Part of the Resistance Inside the Trump Administration” and attributed to a mystery “senior official”.

It came a day after the Washington Post detailed veteran journalist.

Though the author of the New York Times article said there had been discussion of removing the “amoral, impetuous, adversarial, petty and ineffective” Mr Trump from power, he or she also drew attention to administration achievements – Republican goals including “effective deregulation, historic tax reform, a more robust military and more”.

The “adults in the room” had achieved this while working around the president’s “half-baked, ill-informed and occasionally reckless” decisions, the author said.

Amidst a torrent of criticism and official denials and a gleeful Washington whodunnit – and with suspicion falling on Mr Pence himself, given the use of “lodestar”, a word common in his public remarks – the vice-president told CBS he “wouldn’t know” who wrote the piece.

“But what I can say,” he said, “it’s a disgrace. I think the author – and frankly the New York Times should be ashamed.”

The 25th amendment provides for the removal of a president on grounds of inability “to discharge the powers and duties of his office”. It must be invoked by the vice-president and members of the cabinet. Asked if the process had been discussed, Pence said: “No. Never. And why would we?”

In his book, Fear, Mr Woodward quotes then Republican National Committee chairman Reince Priebus as saying in October 2016 Pence was “prepared to step up”, with former secretary of state Condoleeza Rice “as his VP”, when Mr Trump faced the Access Hollywood tape scandal.

In his CBS interview, Mr Pence did not dwell on such tantalising what-ifs. Instead, he swivelled mid-answer to attack Trump’s immediate predecessor. Since Friday, Barack Obama has delivered two explicitly political speeches, criticising the president and aiming to fire up Democrats for the midterm elections.

The “truth of the matter”, Mr Pence said, “is over the last eight years, despite what we heard from president Obama on Friday, I mean this country was struggling.”

Mr Pence also spoke to Fox News Sunday. He told that show “it was very disappointing to see Obama break with the tradition of former presidents and become so political and roll out the same tired arguments that he and liberals have made over the last eight years”. – Guardian Service