Russian spy and the perfume bottle: How police believe Skripals were poisoned 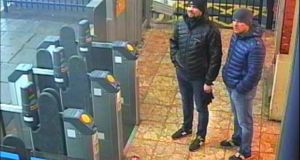 The City Stay Hotel, an unprepossessing, end-of-terrace house in the east London neighbourhood of Bow, boasts just two stars and offers rooms at £49 a night. But British prosecutors believe this was the base of operations last March for two Russian intelligence officers sent to poison their former comrade Sergei Skripal with a deadly nerve agent.

The two men arrived at Gatwick Airport on board an Aeroflot flight from Moscow at 3pm on Friday, March 2nd, travelling on passports in the names of Alexander Petrov and Ruslan Boshirov. Police believe the names are aliases but the two men had used the same passports to travel to Britain previously and had visited other European countries.

Both around 40, the two men were dressed casually in jeans, sneakers, sweaters and down jackets, each with a bag carried over their shoulder as they arrived at the airport. They took a train to Victoria station and travelled from there to Waterloo and on to their budget hotel in Bow.

Theresa May told MPs on Wednesday that British intelligence services have identified Petrov and Boshirov as officers in Russia’s military intelligence, known as the GRU. Established by Lenin in 1918, a year after the Russian revolution, the GRU remained intact after the fall of the Soviet Union and is now believed to be Russia’s biggest intelligence agency.

Skripal was a colonel in the GRU until his arrest in December 2004 after he was unmasked as a double agent who had passed secrets to MI6 throughout the 1990s. Jailed in 2006, Skripal was alleged to have blown the cover of more than 300 Russian agents and he was viewed as such a valuable asset in London that he was one of four spies swapped in 2010 for 10 Russian agents arrested in the United States.

Skripal moved to Salisbury in Wiltshire, where he appeared to live quietly at first but later began sharing his insights into Russia’s spying operations with the intelligence services of other countries, including the Czech Republic and Estonia.

According to police, Petrov and Boshirov carried with them from Moscow a small box containing what appeared to be a bottle of Nina Ricci Premier Jour perfume. The nozzle had been replaced with an applicator and instead of scent, the bottle contained Novichok, a chemical that attacks the nervous system and can lead to convulsions and respiratory failure.

“The manner in which the bottle and packaging has been adapted makes it a perfect cover for smuggling the weapon into the country, and a perfect delivery method for the attack,” said Scotland Yard’s counter terror Commissioner Neil Basu.

On the afternoon of Saturday, March 3rd, Petrov and Boshirov took the train from Waterloo to Salisbury, a journey of about 90 minutes. They stayed in the cathedral city for less than two hours for what police believe was a reconnaissance trip before they were caught on CCTV at the station returning to London.

The following morning, the two men left their hotel shortly after 8am, and made the same journey from Waterloo to Salisbury, arriving at 11.48am. Police believe they went to Skripal’s house, where his daughter Yulia was visiting him, and applied Novichok to the front door.

An hour after the attack, at 1.08pm, they were pictured walking in Salisbury, with Petrov carrying a rucksack and apparently smiling. By the time they boarded a train to Waterloo at 1.50pm, Petrov and Boshirov had discarded the contaminated perfume bottle, including its packaging.

Skripal and his daughter left their house before 1.30pm and went to a pub and a restaurant in the city centre. At 4.15pm they were found slumped on a bench and taken to hospital in a critical condition. Nick Bailey, a police officer who arrived at the scene, was also contaminated by the nerve agent and was hospitalised.

While the Skripals were receiving treatment in hospital, Petrov and Boshirov were back in London and on their way to Heathrow airport, where they passed through passport control at about 7.30pm before boarding a flight to Moscow.

After a number of weeks when their condition appeared to be fatal, the Skripals and PC Bailey slowly recovered in hospital. But the damage done by the Novichok poisoning was not over because more, than three months later, on June 27th, 48-year-old Charlie Rowley found the discarded Nina Ricci perfume box in a charity bin.

Inside he found the bottle and the applicator and putting them together, got some of the contents on himself before giving the bottle to his partner Dawn Sturgess, who applied some to her wrists. Soon afterwards, they both fell ill and Sturgess died in hospital just over a week later on July 8th.

Basu said on Wednesday that the poisonings of the Skripals and Rowley and Sturgess now form a single investigation.

“We do not believe Dawn and Charlie were deliberately targeted but became victims as a result of the recklessness in which such a toxic nerve agent was disposed of,” he said.

Sue Hemming, director of legal services at the Crown Prosecution Service, said on Wednesday there was enough evidence to charge Petrov and Borishov with conspiracy to murder Sergei Skripal; the attempted murder of Sergei Skripal, Yulia Skripal and Nick Bailey; the use and possession of Novichok contrary to the Chemical Weapons Act; and causing grievous bodily harm with intent to Yulia Skripal and Nick Bailey.

“We will not be applying to Russia for the extradition of these men as the Russian constitution does not permit extradition of its own nationals. Russia has made this clear following requests for extradition in other cases. Should this position change then an extradition request would be made,” she said.

“We have, however, obtained a European arrest warrant (EAW), which means that if either man travels to a country where an EAW is valid, they will be arrested and face extradition on these charges for which there is no statute of limitations.”