Venezuela accuses US of plotting against Maduro

‘We denounce before the world the United States’ intervention plans,’ says Minister 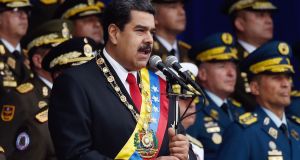 Venezuela and one of its allies accused the United States on Saturday of plotting against its president, Nicolas Maduro, who has presided over a near collapse of the country.

“We denounce before the world the United States’ intervention plans and help to military conspirators against Venezuela,” he said on Twitter, adding that the article had “brought to light new and crude evidence” of such a plot.

The article, based on interviews with US officials and a Venezuelan former military commander who is seeking to overthrow Mr Maduro, gave an account of several meetings that took place starting last fall and continuing into this year.

The main request of the military plotters was encrypted radios, which they planned to use to communicate among themselves in order to capture Mr Maduro and his lieutenants.

But the United States never granted the request, and after multiple meetings, the Venezuelans became frustrated. Mr Maduro’s government has since jailed dozens of the conspirators, although many remain at large.

Among those who denounced the secret meetings was president Evo Morales of Bolivia, a longtime leftist ally of Mr Maduro, who referred to them Saturday as “Trump’s coup conspiracy.”

In a tweet he wrote: “The free countries of Latin America will withstand and defeat any further attacks of the Empire against the peace and democracy in the region.”

The White House has not commented on the meetings. On Saturday, Garrett Marquis, a spokesman for the national security council, said the United States preferred “a peaceful, orderly transition to democracy in Venezuela.”

He added that the government “hears daily the concerns of Venezuelans from all walks of life” and that “they share one goal: the rebuilding of democracy in their homeland.”

However, some former officials defended the meetings, arguing that something must be done to stem the humanitarian crises set off by Mr Maduro’s authoritarian leadership, from shortages of food and medicine to the migration of millions of Venezuelans from the country.

“If you don’t like the idea of the US talking to the military, then what do you propose?” said Richard Haass, a former top state department official in the George W Bush administration who is the president of the council on foreign relations.

He said that while he did not support a coup, the region should consider a “Latin American coalition of the willing,” an alliance of Venezuela’s neighbours created for a possible regional military intervention, similar to the United States’ invasion of Iraq.

While Latin American leaders loudly condemned remarks by Mr Trump last year saying there was a “military option” to thwart Mr Maduro, the reaction to the news that US officials had met with coup plotters was muted this time. Morales was the only president who came to the defence of Mr Maduro.

That reflects the growing exasperation with, Mr Maduro’s government, some experts say.

“There is so little sympathy now,” said Michael Shifter, the president of the Inter-American Dialogue, a Washington policy forum. While Mr Shifter does not support a coup either, he said comparisons to the overthrow in Chile of Salvador Allende in 1973 by general Augusto Pinochet, who became a military dictator, were unfounded, given the humanitarian crisis Mr Maduro had caused.

There are signs that the Trump administration may harden its stance toward Mr Maduro, one of the few sitting presidents currently under sanctions imposed by the United States.

The White House is expected to name Mauricio Claver-Carone to head Latin America affairs at the national security council.

Mr Claver-Carone is considered a conservative hard-liner on Cuba and was involved in tightening US sanctions against Venezuelan officials. He would report to John Bolton, who came to lead the security council in April and is also seen as more hawkish than his predecessor.–New York Times