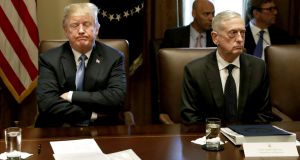 US president Donald Trump and defence secretary James Mattis at a cabinet meeting at the White House on June 21st, 2018. Photograph: Yuri Gripas/Bloomberg

And then there were none. It is only a slight exaggeration to say that Jim Mattis, the outgoing US secretary for defence, was the last grown-up in Donald Trump’s “axis of adults”.

Around the world, America’s allies and adversaries alike have treated Mattis as their comfort blanket. No matter how impulsive his commander-in-chief might be, Mattis was there to curb his instincts. For the past two years he has tirelessly toured the world to reassure America’s partners that nothing has fundamentally changed.

Sometimes they believed him. Now he is leaving. He will join an august – and not so august – roll call of serving and former generals and diplomats who surrounded Trump at the start of his administration.

From the outset Mattis was seen as the indispensable one. Almost alone among Trump’s cabinet principals, he declined to offer effusive praise in public for his president – and was widely known to have spoken home truths to Trump in private.

In the first year, Trump generally took his advice. But for Mattis, Trump would have been even more dismissive of Nato. He would also probably have cancelled US-South Korea military exercises, pulled the US out of Afghanistan and announced the American withdrawal from Syria far sooner.

Trump initially loved the former marine general’s mien: he described “Mad Dog” Mattis as straight from central casting. The problem was that Mattis did not live up to his name. Whenever Trump had a madcap idea, his defence secretary was there to blunt it.

It would be wrong to view his exit on a par with the others. It is far more serious. Rex Tillerson, the former secretary of state, was fired. HR McMaster, the former national security adviser, was, at best, constructively dismissed. And General John Kelly, the outgoing White House chief of staff, was at loggerheads with his undisciplined president from day one.

The world drew far less reassurance from their presence than they did from that of Mattis. His resignation is as shocking as it is unsurprising. Military figures do not resign. The only parallel would have been if former general Colin Powell had quit as George W Bush’s chief diplomat in the build-up to the Iraq war. He did not.

Military men obey orders. If their advice is spurned, they knuckle down. Mattis swallowed that for almost two years. His friends believe he should have quit in October when Trump ordered military personnel to defend the US-Mexico border from an alleged invasion of central American refugees. For the first time, Mattis was heavily criticised when he meekly agreed to follow that order.

The move, which was classic Trumpian theatre ahead of the midterm elections, crossed a civil-military line. But the final straw was Trump’s tweet on Wednesday on the US pullout from Syria. It went against the urgent advice of Mattis – and almost all others. Moreover, Trump’s premise of having defeated Islamic State was belied by the facts. In some parts of Syria, and the broader Middle East, the terrorist group is resurgent.

What happens now? Regardless of who replaces Mattis, the world has lost a critical lifeline – much like that popular game show I used to watch. It can still phone plenty of friends, all of whom will sympathise. It can also ask the audience (ditto). But it knows that military men do not resign in US politics.

That Mattis could no longer stomach his job marks a watershed for an administration that is rapidly losing whatever shreds of credibility it had. – Copyright The Financial Times Limited 2018