Irish officials ramp up efforts for US working visa

With Congress in its final week, Ireland needs unanimous approval from the Senate 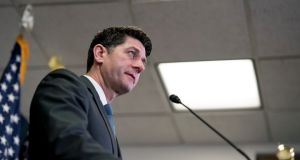 Irish officials are intensifying efforts to ensure that a Senate decision on extending E3 visas to Irish citizens takes place in the coming days, amid signs of some pushback from senators.

With the current Congress in session for its final week, Ireland needs to secure a Senate vote on the proposed legislation imminently.

While the House of Representatives backed the Bill last month, the legislation needs unanimous approval by the 100-member Senate.

A vote had been expected late last week after several senators dropped their objections, but at least one “hold” remains on the legislation, meaning that at least one member of the senate still has concerns.

Right-wing website Breitbart has highlighted the story, noting that the proposal would allow “about 5,000 more Irish graduates per year to take salaried jobs in the United States, even though many of those jobs are also sought by debt-burdened US graduates.”

It has decried the visa proposal as an “Irish-only bill” that it says could provide the Irish with roughly 50,000 endlessly renewable work permits per decade.

In particular, outgoing House Speaker Paul Ryan, who has been a key figure in the current effort to extend the visa programme to Irish citizens, has come in for criticism for prioritising the legislation in the final days as Speaker of the House.

Mr Ryan is a proud Irish-American, who spoke this year of his desire to become US ambassador to Ireland in the future.

In a worrying development, Democratic Senator Brian Schatz of Hawaii criticised the move over the weekend.

“Paul Ryan is still the Speaker of the House and they are out of session until Wednesday, with shutdown looming Friday. But, in his defence he IS (checks notes) working on getting more (checks notes again to make sure) people from Ireland into America,” he tweeted, adding: “Seriously, he is doing that.”

It is understood that president Donald Trump’s administration is behind the deal and could push the Senate to back the proposal.

Mick Mulvaney, who was appointed White House chief of staff late on Friday, is a central figure behind the deal which was discussed during Taoiseach Leo Varadkar’s meeting in the Oval Office on St Patrick’s Day.

US special envoy John Deasy and the Embassy of Ireland in Washington have been lobbying behind the scenes to get the visa deal over the line.

Crucial for congressional support is the fact that the proposal offers reciprocal arrangements for Americans who want to live in Ireland, including retirees. The details of that proposal will be worked on by the Department of Justice in Ireland and the US Department of Homeland Security in the coming months.

If endorsed by the Senate this week, it will then pass to Mr Trump for signing.

The E3 is a two-year renewable visa which allows Australian citizens and their spouses to live and work in the United States.

Australia negotiated the visa programme in 2005 as part of the US-Australia trade agreement, and it was widely seen as a reward for Australia’s support for the US in the Iraq war.

Applicants must have a job in the United States to qualify and have certain academic or other qualifying credentials. But the E3 is significantly easier and less costly to obtain than the traditional H1B visa. It currently costs $250 to apply for the visa.

Australia had initially raised some concerns about the proposed extension of the scheme to Irish citizens. As a result, Irish nationals will only be permitted to apply for the visa after Australian nationals have first applied.