US defence secretary Jim Mattis to leave position next year 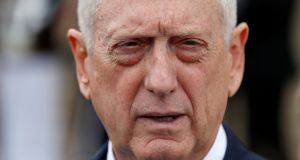 “General Jim Mattis will be retiring, with distinction, at the end of February, after having served my Administration as Secretary of Defense for the past two years,” Mr Trump wrote on Twitter.

“During Jim’s tenure, tremendous progress has been made, especially with respect to the purchase of new fighting equipment.

“General Mattis was a great help to me in getting allies and other countries to pay their share of military obligations. A new Secretary of Defense will be named shortly.

“I greatly thank Jim for his service!”

Mattis, a retired Marine Corps general, was known as a stabilising force in Mr Trump’s cabinet. His departure had been anticipated since Mr Trump announced on Wednesday that he was withdrawing US troops from Syria despite opposition from US allies and his own top military officials.

In a letter to Mr Trump read out on CNN, Mr Mattis was quoted as saying he was resigning “because you have the right to a secretary of defence whose views are better aligned with yours”. – Reuters