Could Donald Trump be on the verge of his Watergate? 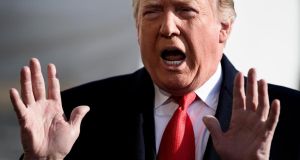 US president Donald Trump faces a potentially treacherous time as Democrats prepare to take control of the House of Representatives in January. Photograph: Brendan Smialowski/AFP/Getty Images

When Donald Trump boards Air Force One and heads to his Mar-a-Lago estate in Florida for Christmas, he will be leaving behind a Washington that is bracing itself for the conclusion of special counsel Robert Mueller’s investigation.

Two years into Trump’s presidency, the special counsel inquiry into Russian interference in the election appears to be stepping up a gear.

The former FBI director was appointed in May 2017 to run the department of justice’s Russia investigation. Almost 20 months later, four former Trump advisers and his former campaign chairman have pleaded guilty to charges; a total of 33 people have been indicted – 26 of them Russians.

The past few weeks have seen the emergence of the most damaging allegations to date. Trump’s one-time lawyer Michael Cohen and David Pecker, the head of AMI, the company which owns the National Enquirer, have effectively turned on the president.

Federal prosecutors are also investigating possible misuse of inaugural committee funds, amid reports that countries such as Qatar, Saudi Arabia and the United Arab Emirates illegally gave donations to gain access to the incoming administration.

The recent flurry of activity related to the Mueller inquiry is coinciding with a potentially treacherous time for Trump as Democrats prepare to take control of the House of Representatives in January. The incoming chairs of key congressional committees – including the judiciary, ways and means, and intelligence committees – have indicated that they will use their subpoena powers to force Trump to release documents relating to his business and tax affairs.

But while Democrats are flexing their muscles when it comes to oversight, they are less strident on the question of impeachment.

Mueller is expected to deliver a report on his investigation to Congress when it concludes. It will then fall to the House judiciary committee in the first instance, and then the full 435-member House, to decide whether to begin impeachment proceedings. The trial would then be conducted in the Senate, but a two-thirds majority is needed for conviction. With Republicans commanding a majority in the Senate, members of Trump’s own party would have to turn against him in order for him to be impeached.

*Democrats are mindful of the lessons of the Clinton saga 20 years ago. Then, Republicans vigorously pursued the impeachment of a Democratic president, but ultimately it backfired. Having voted for impeachment in the House in October 1998, Republicans, who had been expecting to make double-digit gains in the midterms, suffered huge losses in the elections the following month.

Polls showed that while the public overwhelmingly believed that Bill Clinton had lied under oath, most Americans did not want an impeachment.

Twenty years later this lesson is weighing on Democrats. Nancy Pelosi, the presumed incoming speaker of the House, was in Congress during the Clinton impeachment. Unsurprisingly, she encouraged her party not to focus on Trump during this year’s midterm campaign but instead highlight bread-and-butter issues such as healthcare. It worked, with Democrats picking up about 40 seats.

Others are wary about the only impeachable offence that has apparently emerged from the Russia inquiry so far – campaign finance law violations. Many doubt that this would be enough to justify an impeachment even if technically it would constitute an impeachable offense.

As Jerry Nadler, the incoming chair of the judiciary committee put it, if the hush-money payments are true, then those actions are impeachable offenses. But “whether they are important enough to justify an impeachment is a different question”.

Others have focused on possible criminal charges that Trump may face when he leaves office, with House intelligence committee incoming chairman Adam Schiff predicting that Trump could face jail time when he is no longer protected by department of justice guidelines that effectively prevent the indictment of a sitting president.

Nonetheless, calls for congressional action on Trump are beginning to build as the Mueller investigation appears to move ever-closer to the president’s inner circle. Some Republicans are getting nervous. In an unusual move last week Utah senator Orrin Hatch issued a statement correcting a response he had given previously to a question about the alleged campaign finance law violations by the president. Hatch had responded: “I don’t care . . . he’s doing a good job as president.” But a day later he described his comments as “irresponsible and a poor reflection on my lengthy record of dedication to the rule of law”.

Many believe that only evidence of serious collusion with a foreign power would prompt Senate Republicans to consider impeaching the president, and the record of the Republican Party so far has been to row in behind the mercurial president in all situations.

But much will depend on the mood of the country when Mueller finally reports. After all, Richard Nixon’s popularity held up surprisingly well as the Watergate saga trundled on, with the two-term president winning a landslide victory in the 1972 election. It was only as the scandal deepened in late 1973 and 1974 that the public mood definitively moved against him.

While Trump will no doubt hope that Fox News and his own Twitter platform’s characterisation of the Mueller investigation as a witch-hunt will help keep his voters on side, Republicans in Congress are awaiting nervously the finding of the special counsel’s investigation.

What is clear is that the outcome of the Mueller inquiry is likely to dominate the third year of Trump’s presidency.

1 Why are markets booming when a crash is on the way?
2 Open Ireland as soon as possible - Tourism chief warns of 'catastrophic' impact of pandemic
3 World, look away now – these are dark days for the United States
4 Bobby Storey: The IRA's planner and enforcer who stayed in the shadows
5 Irish holidaymakers have been thrown under the bus
Real news has value SUBSCRIBE