Putin slams US for exiting controls against ‘catastrophic atomic war’

‘Is this democracy?’ Russian president asks of any potential second referendum on Brexit 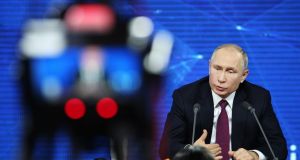 Vladimir Putin warned of the growing threat of a catastrophic nuclear conflict on Thursday as he slammed the US for pulling out of arms control treaties that have underpinned global security for decades.

The Russian president had tough words for the West and for the Ukraine leadership as he fielded questions for a full three hours and 44 minutes at his annual end-of year press conference in Moscow.

Some 1,700 reporters from across Russia had crammed into a packed hall and clamoured so loudly for attention that Putin at one point warned he would have to end the meeting if they did not quieten down.

Putin placed blame on the US for what he described as a dangerous trend of “lowering the threshold” for the use of nuclear weapons that could lead to a catastrophic atomic war.

The US decision this year to exit the Soviet-era Intermediate Range Nuclear Forces Treaty following its withdrawal in 2002 from the Anti-Ballistic Missile Treaty had brought global arms control to the brink of collapse. “If something happens, it could lead to the end of civilisation or the planet. It’s regrettable that this tendency is growing,” he said.

In another stab at Washington, Putin cast doubt on Donald Trump’s plan announced this week to withdraw US forces from Syria. “US troops have been in Afghanistan for 17 years and every year they say they are being withdrawn, but they are still there.”

Trump was correct in claiming that Islamic State (also known as Isis) had been largely defeated in Syria, but there was a risk that the extremist militant organisation would regroup in neighbouring countries and in former Soviet Central Asia.

For Putin, the highlights of 2018 were hosting the Fifa World Cup and the March presidential election, where he won a fourth term in office with a record majority.

Meanwhile, politicians in “the Anglo-Saxon world” were facing “serious problems” that were undermining their democratic credentials.

Allegations that Russia interfered in the 2016 US presidential election were a political ploy used to delegitimise Trump’s triumph at the polls, Putin said. “Trump won and that is an obvious fact, but nobody wants to recognise his victory.”

Turning to the UK, Putin said he understood the problems besetting Theresa May as she battled calls for a second referendum that could halt the British exit from the European Union. “She has to fulfil will of the people expressed in referendum. Or was it not a referendum? Someone disliked the result, so repeat it? Is this democracy?” he said.

Putin castigated the Ukraine leadership for “provoking” the naval clash in the Kerch Straits last month that saw Russia seize three Ukrainian vessels approaching the Azov Sea and arrest their crews. Petro Poroshenko, the president of Ukraine, had irresponsibly used the incident to boost his flagging domestic ratings ahead of Ukraine’s presidential elections next year, Putin said. “They were counting on one of their sailors being killed. Thank God it did not happen.”

Russia remained willing to observe the agreement with the Ukrainian government for joint use of the Azov Sea, but would not consider releasing the 24 jailed Ukrainian sailors until they had undergone legal trials.

Asked by a reporter about the risk of fresh western sanctions over the Kerch incident and the poisoning of Sergei Skripal, Putin said Russia had lived for “almost its entire history under some kind of restrictions,” and would adapt to the challenges ahead. Sanctions had weighed on the Russian economy, which is expected to grow by just 1.7 per cent this year, but had also brought benefits, stimulating investment in import substitution projects and driving a surge in agricultural output. Countries imposing sanctions had a single goal: to restrain Russia’s development as a great power, Putin said.