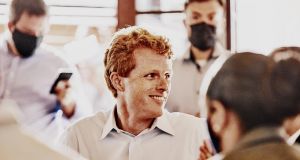 Joe Kennedy III has been building his political profile in Washington since his election to the House of Representatives in 2013. Photograph: Simon Simard/Bloomberg

As Donald Trump and Joe Biden tee up for what promises to be one of the most closely-watched presidential races in American history, in the northeastern state of Massachusetts another battle is under way.

On Tuesday, Democratic primary voters go to the polls to select their candidate for the Senate. The race pits two Irish-Americans against each other in one of the most reliably blue states in the country.

Incumbent Ed Markey may have felt he was a shoo-in as he faced re-election this November. But that was before a young congressman by the name of Joe Kennedy III sent ripples through Democratic politics by announcing he would challenge Markey for the Senate seat.

The red-haired grandson of Robert Kennedy, the former attorney general who was assassinated in 1968 five years after his brother, Joe Kennedy III has been building his political profile in Washington since his election to the House of Representatives in 2013. In 2018, the 39-year-old was chosen to given the Democratic Party’s official rebuttal to Trump’s state of the union address.

When he formally entered the race last year, polls placed him well ahead of Markey, signifying an appetite for generational change, with his appeal bolstered by a formidable political legacy.

But in recent months the race has tightened. Markey has been steadily rising in the polls. A stalwart of Democratic politics, the 74-year-old has spent four decades in Congress, first in the House of Representatives before replacing John Kerry as senator when Kerry was appointed secretary of state in 2013.

His support for progressive causes – he sponsored Alexandria Ocasio-Cortez’s Green New Deal last year, before Kennedy announced his bid – has underlined his liberal credentials. This, and a savvy social media campaign, partly accounts for his strong support among young voters, despite the age gap between him and Kennedy.

The race has also entangled some of the party’s most senior figures, torn by dual loyalty. In a big boost to Markey, Elizabeth Warren, the other senator for Massachusetts, endorsed her colleague. This is despite the fact that Kennedy, a former student of Warren’s at Harvard, backed her in the early days of the presidential primary contest.

But in a boon for Kennedy, House speaker Nancy Pelosi announced last week that she was endorsing the younger candidate, despite working with Markey for decades in the House of Representatives.

“Never before have the times demanded we elect courageous leaders as today. And that is why I’m proud to endorse Joe Kennedy for Senate,” she said in a video confirming the endorsement, also highlighting his efforts in helping Democrats win back control of the House in the 2018 midterm elections.

As primary day nears, the campaign has turned more antagonistic, amid accusations from both sides about underhand tactics. Kennedy has accused Markey’s social media campaign of “toxic” behaviour, stating that he and his family have received death threats. Markey’s campaign denied any connection with the social media attacks, and accused the Kennedy campaign of shedding “crocodile tears”.

Tuesday’s contest is not the only race that will be closely watched this week in Massachusetts. Richard Neal, one of the most senior Democrats in Congress and co-chair of the Friends of Ireland caucus on Capitol Hill, faces a primary challenge from the mayor of Holyoke, Alex Morse.

Though Neal is expected to win the primary, the race has also become contentious. Neal’s campaign categorically denied allegations of involvement in a smear campaign against Morse, after reports – subsequently discredited – surfaced that he had made unwanted sexual advances to young men.

Neal, who has participated in three debates with Morse, is ahead of his challenger in the polls. But like many incumbents he is likely conscious of the fate of Joe Crowley, another Irish-American Democrat in Congress. Crowley, who was seen as a possible successor to Pelosi as speaker of the House, lost his primary contest with Ocasio-Cortez, a first-time candidate in 2018, in his New York district. Her victory was a manifestation of generational as well as demographic change – while the district represented by Crowley was once populated by Irish Catholics, it is now majority Hispanic.

A similar political upset occurred in the 2018 season in Markey and Neal’s own backyard. Massachusetts’s political establishment is still reeling from Michael Capuano’s defeat by newcomer Ayanna Pressley, one of the four female members of the so-called “squad”, a progressive group of first-time candidates that includes Ocasio-Cortez.

With the primary races just days away, all eyes will be on Massachusetts this week. In this election season, anything is possible.