Biden finally got Obama to hand over the electoral Excalibur 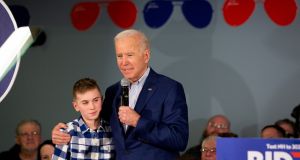 Joe Biden talks with Brayden Harrington (13) about stuttering, something they share, during a campaign stop in February. Photograph: Elizabeth Frantz/The New York Times

Whenever I called my mom to tell her something bad had happened, she said, “I know”. As US politician Daniel Patrick Moynihan famously put it, “To be Irish is to know that, in the end, the world will break your heart”.

Joe Biden has had his heart broken again and again and again. And yet somehow – against all odds, in one of the most remarkable resurrections in political history – Biden stood with a full heart before an empty hall to accept his party’s nomination.

“This is our moment to make hope and history rhyme,” he said, using the Seamus Heaney line alluding to the Irish finding a way beyond the Troubles to peace. But there’s another Heaney line, the one the Nobel laureate chose for his gravestone in Bellaghy, that suits the moment even better: “Walk on air against your better judgment.”

That is what Biden is doing. At 77, he has spent half a century running races; he has been dismissed and written off and gotten tangled up in his own missteps. He has been immobilised by grief, slowed by age and imprisoned by this plague. And yet the old war horse has made it to his party’s winner’s circle – and he has a real shot at the Oval.

Never naming Donald Trump in his speech, Biden vowed to be 'an ally of the light, not of the darkness'

At an Iowa caucus event in 2008, the Biden booth was so lonely, the campaign literature so untouched, I actually picked up a Biden bumper sticker just out of pity. It’s still in my office. And look at Uncle Joe now. He is, at long last, walking on air. His roots are a mix of Irish, English and French (hence, his middle name, Robinette). But he has always consciously made a choice to embrace the Irish Catholic side on the advice of his grandmother, who told him, “Remember, Joey Biden, the best drop of blood in you is Irish.”

While Biden has gotten in trouble for blarney, he does not embrace the Irish propensity, woven through our literature and history, to let the past drag down the present. Through all of his travails and disappointments – as he went from being a cocky 29-year-old senator-elect to a chastened 72-year-old vice president pushed aside for Hillary Clinton – he never lost his passion for the American ideal that anything is possible if you work hard enough and dream big enough.

And that is how he cast his vision for the US – in mythic terms of light and darkness, empathy and cruelty, decency and despicability. Never naming Donald Trump in his speech, Biden vowed to be “an ally of the light, not of the darkness”, and to help us “overcome this season of darkness in America”.

The antidote to Trump’s dystopia, he said, would be the illumination of Ella Baker, a civil rights icon: “Give people light and they will find a way.” It was the perfect framing of this titanic fight. Trump does seem mythological, a Grendel wailing and “greedily loping”, leaving the villagers in a constant state of anxiety. (Heaney did a renowned translation of Beowulf.)

Trump is, as Kamala Harris suggested in her speech, a predator. The Republicans have an epic war chest this cycle and the Democratic team will need a coat of mithril, Tolkien’s fictional metal that’s stronger than steel, to withstand the onslaught of vicious attacks from these Orcs.

I asked Trump during the 2016 campaign, as he was ratcheting up his racist bile, why he had gotten so dark. Why was he encouraging violence at his rallies and inciting anger at reporters covering him? He thought about it for a moment and answered honestly: “I guess because of the fact that I immediately went to number one and I said, ‘Why don’t I just keep the same thing going’.”

The Obamas’ speeches at the convention were real “in case of emergency break glass” moments. “I did hope, for the sake of our country, that Donald Trump might show some interest in taking the job seriously,’’ the former president said, “that he might come to feel the weight of the office and discover some reverence for the democracy that had been placed in his care. But he never did.”

And, as Michelle Obama said, “Being president doesn’t change who you are; it reveals who you are”. Trump, she added, is “clearly in over his head”. Malignant neglect was the theme of the week, capped when Biden charged that Trump’s failure to protect the nation during the pandemic was “unforgivable”.

Conventions lost their spontaneity and bite a long time ago. Ever since I started covering them in 1984, they’ve been pretty tame affairs, prewashed, prechewed and preordained.

There would be the occasional bit of unscripted drama – an overcaffeinated Dan Quayle bounding up like a new puppy to be introduced by George HW Bush, who looked a bit alarmed; Al Gore trying to prove he was no Bill Clinton with an excruciatingly long, uxorious kiss with Tipper; the non-uxorious Dick Morris getting caught hiring a prostitute and sucking her toes, news that broke while he was orchestrating Bill Clinton’s family-values convention.

But mostly, the quadrennial conventions of the Republican and Democratic parties were lame reality shows with bad lighting. So while the first virtual Democratic convention may not always have been mesmerising, it didn’t have much to measure up to. The chatty Zoom call with the vanquished 2020 contenders – Pete, Andrew, Elizabeth, Cory, Beto, Amy and Bernie – looked like a reality show reunion special.

Hillary must have been tossing darts at the TV screen as she watched Bernie, all apple-cheeked and enthusiastic about Biden after he had been so begrudging about her. It was gratifying to hear the Obamas finally say, with such icy contempt, what we knew they were thinking about Trump. And Biden finally got Obama to hand over the electoral Excalibur. The convention did what it needed to do.

Now we will see if Biden can handle the debates and if his overprotective staff will let him venture any interviews tougher than MSNBC and People magazine. Of course, the attention addict in the White House did not follow tradition and lay back while the rival party presented its case.

He bounced around the country trying to snatch the spotlight, offering some prime examples of projection. The progenitor of American carnage called Democrats “totally stone-cold crazy” and said they had held “the darkest and angriest and gloomiest convention in American history”.

I suppose the Republicans will be pink spun cotton candy when they hold their virtual festival of grievances, starring the penny ante Bonnie and Clyde from St Louis who waved guns at Black Lives Matter protesters, and programming that is bound to delight the loonies in QAnon.

Trump’s shady circle, with its cascade of casino games, also pulled focus from the Democrats. The latest to fall was Steve Bannon. It was a delicious irony, given the president’s attempts to undermine the US Postal Service, that the architect of Trump’s phony populist campaign got yanked off a yacht owned by a fugitive Chinese billionaire by federal postal inspectors. Bannon and his cronies were charged with siphoning funds donated to a private project called “We Build the Wall”.

The darkness of Bannon’s arrest on Thursday was a marked contrast with the lightness of Brayden Harrington’s star turn at the convention. In one of the most moving convention scenes ever, Brayden, a 13-year-old from New Hampshire, courageously and charmingly talked about how Biden, who has had a lifelong struggle with stuttering, tried to help him with his own stutter. (As opposed to Trump’s denigration of the disabled.)

Mister Rogers, he of the neighbourhood in the TV series, always said that the worst type of human beings were the ones who made you feel “less than”. That is Trump’s MO. Brayden made the case for Biden being the opposite, someone who tries to make you feel “more than”.

The teenager said that Biden “told me about a book of poems by Yeats he would read out loud to practice”. He concluded that he was supporting Biden because “we need the world to feel better”.

Biden loves to use the Yeats line from Easter, 1916, about a world “all changed, changed utterly”. So, please, change it. Utterly.