America Letter: In January, the White House could have an Irish-American hue 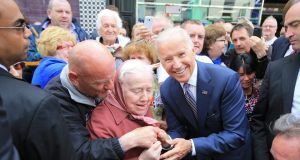 US vice-president Joe Biden meets locals in Ballina, Co Mayo during a visit to Ireland in June 2016. Photograph: Paul McErlane/EPA

With the official nomination this week of Joe Biden as the Democratic candidate for November’s election, the former vice-president moves one step closer to becoming president.

It also marks the possible return of an Irish-American to the White House.

Biden is a politician who has highlighted his Irish-American identity throughout his career, as evidenced by his reference to Seamus Heaney in his acceptance speech on Thursday night.

Biden was brought up in Scranton, Pennsylvania in an Irish-American Catholic household. His sister Valerie Biden Owens, who remains a close adviser to the former vice-president, has spoken widely about the importance of the family’s Irish roots on their mother’s side.

Like many of his generation, Irish-American meant Irish Catholic, and, if elected in November, Biden will be the first Catholic president since John F Kennedy.

Biden has spoken openly about his faith; he is a practising Catholic and carries rosary beads with him since his son Beau’s death in 2015. His faith is also something that has caused him problems politically, in particular his stance on abortion. A former supporter of the Hyde Amendment – which bans the use of federal funds for abortion – he says he is now firmly behind a woman’s right to choose.

The Biden campaign is staffed by a number of prominent Irish-Americans. Campaign manager Jennifer O’Malley Dillon, who worked on Beto O’Rourke’s presidential campaign last year, is on the board of the Washington Ireland Program, an internship programme whose alumni include Leo Varadkar. Born in Boston, her roots are in Co Galway.

Jake Sullivan, a senior foreign policy adviser to the Biden campaign, who served as the former vice-president’s national security adviser, also has a strong interest in Irish affairs. He advised former secretary of state Hillary Clinton on Northern Ireland and accompanied Clinton on her 2009 visit to Belfast and Dublin.

A member of the ad hoc committee to protect the Good Friday Agreement, he was one of the signatories of a letter to then prime minister Theresa May raising concerns about Brexit’s impact on Northern Ireland.

Other influential Irish-American members of his campaign team include deputy political director John McCarthy, a former chief of staff on Capitol Hill, and Carmel Martin, vice-chair of the Washington Ireland Program board.

Irish-American Democrats have also rowed in behind the Biden campaign from the outset.

Brendan Boyle and Conor Lamb – both members of Congress representing the electorally important state of Pennsylvania – were early Biden supporters. This week they were chosen as two of the 17 “rising stars” of the Democratic Party to speak at the convention. Other veteran Democrats such as Chris Dodd, the former senator who led Biden’s vice-presidential search committee, are also close to the former vice-president.

What would a Biden presidency mean for Ireland? In contrast to Trump – a strong Brexit supporter – Biden is a committed internationalist, and his advisers are wary of Brexit.

Specifically, this could manifest itself in negotiations on a UK-US trade deal. While Britain’s influence in the US remains formidable – not least due to its strong defence ties with Washington – a Biden administration would ensure, together with Democrats on Capitol Hill, that any future deal would take account of Northern Ireland.

On tax issues, Biden has already spoken about bringing back American jobs, a policy pledge that could impact on US foreign direct investment into Ireland. But his promise to reverse Trump’s corporate tax cuts would make it more attractive for US firms to stay in lower-tax jurisdictions such as Ireland.

Speaking at a recent “Irish-Americans for Biden” virtual event, Brendan Boyle argued that Ireland would have a strong ally in the White House if Biden is elected. “What a refreshing change it will be to have Joe Biden come this January. To have someone who supports the Good Friday agreement and wants to protect it. Someone who is not mindlessly cheerleading for Brexit no matter the cost,” he said.

Since her announcement as Biden’s running mate, the inevitable search for any Irish links to Kamala Harris has begun. She is said to be descended from Hamilton Brown, a slave-owner who emigrated from Co Antrim to Jamaica.  Like Barack Obama, however, a full genealogical search may have to wait until she makes it to the White House and hosts her first St Patrick’s Day breakfast with the Taoiseach.