America Letter: Democratic candidate believed to have Kamala Harris at top of list 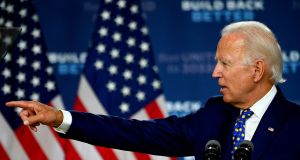 These words from Joe Biden in 2008, as he eviscerated Dick Cheney as probably “the most dangerous vice-president” in American history, are a succinct synopsis of what the role of vice-president entails.

As second-in-command at the White House, the position is sometimes one in search of a purpose. Previous holders of the post have shaped the office to varying degrees. Cheney is widely seen as the most powerful vice-president in history, as he presided over the invasion of Iraq, bolstered by an expansive view of executive power and a malleable president, George W Bush.

Biden served as Barack Obama’s vice-president for eight years, and the relationship between the two was strong, despite personality differences between the ultra-controlled Obama and the loquacious Biden.

Now Biden finds himself in the position of choosing his own running mate as November’s election approaches.

The maxim that a vice-president is only a “heartbeat away” from the presidency – tragically realised by Lyndon Johnson, who was sworn in on the plane back to Washington after the assassination of John F Kennedy in Dallas – has never seemed so pertinent.

If elected, Biden will be 78 years old when he is sworn in. The record is held by Donald Trump, who was 70 on inauguration day. Biden’s advanced age means it is quite likely that his running mate may ultimately become president.

Speculation is rife ahead of the announcement, expected as early as next week. Biden has already committed to picking a female candidate. There is also speculation that he will choose a woman of colour.

The Biden campaign established a committee earlier this summer to lead the selection process, headed by former senator Chris Dodd. Approximately a dozen names are in the running.

Senator Kamala Harris is widely seen as the top choice, though her history as a prosecutor in California is likely to come under scrutiny at a time when police reform is in the spotlight.

Despite her clash with Biden in the first Democratic debate, when she lambasted his record on race, Harris’s friendship with his late son, Beau, when both were state attorneys general is likely to stand her in good stead.

While selection committee chair Dodd was reported this week to have criticised Harris’s lack of remorse about her previous clash with Biden, an AP photographer captured her name at the top of Biden’s speaking notes at an event this week. Whether this was in anticipation of a question on the Dodd story, or an indication of her standing in the selection process, is unclear.

Other figures to have emerged as contenders late in the race include race include former national security adviser Susan Rice, and Tammy Duckworth, an Asian-American congresswoman from Illinois and war veteran who lost both her legs in Iraq. Biden’s interest in military families is likely to help Duckworth’s case and she confirmed this week that she had been interviewed for the post.

Two African-American members of Congress have also emerged as serious contenders. One is Karen Bass, chair of the Democratic Black Caucus, who was pictured chatting to Biden after he paid his respects to the late John Lewis at the US Capitol this week. Former Orlando police chief Val Demings is also in the running, though her former career may be a stumbling block in the current climate.

Other names in contention are Michigan governor Gretchen Whitmer, and Keisha Lance Bottoms, the mayor of Atlanta. While Bottoms was relatively unknown before the George Floyd protests propelled her city into the national spotlight, she was an early supporter of Biden, travelling across Iowa in the campaign bus in January when most of the Democratic party had yet to endorse him.

The last few months have seen some early favourites fall by the wayside. Amy Klobuchar’s record as prosecutor in Minnesota came under fire in the wake of the Floyd killing, while Elizabeth Warren’s chances are perceived to have diminished. Nonetheless, the Massachusetts senator is highly respected by Biden.

One possibility doing the rounds in Washington is that Biden could offer her a position in his administration if elected – perhaps even treasury secretary. An unapologetically left-wing senator who has taken on Wall Street in the treasury building? Now that would be radical.