Joe Biden, the Democratic nomination for US president, pledges to be a 'president for all Americans' during his convention speech. Video: Reuters 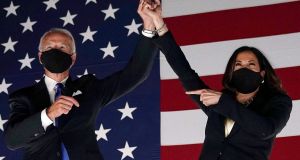 The Democratic National Convention came to a close on Thursday night with Joe Biden’s speech accepting his party’s nomination for president. The balloons and ticker tape may have been absent this year, but the high point of the election calendar still packed a punch.

Here are some of the highlights:

This convention was like no other, as organisers were forced to design and implement an online-only gathering. The result? A surprising success. For two hours each night, millions of Americans tuned in to the virtual-only event. The curtailed timeframe forced speakers to keep to their allotted time, while the absence of applause, cheers and interruptions kept things moving. Technically, there were remarkably few hitches. The content was slickly produced, and included stylish musical contributions from stars like John Legend and Billie Eilish.

One effect of the Covid-era convention was to elevate the voice of ordinary Americans. A highlight was the traditional “roll call” when states cast their votes. The result was a Eurovision-style whirl across the 50 US states and seven territories. From the blue-skied expanses of Montana, to the flashing lights of the Las Vegas strip, the montage showed America in all its richness and diversity. On Thursday, 13-year-old Brayden Harrington spoke about how Biden had helped him with his stutter – one of the many personal stories that stood out during the week.

The last time Democrats gathered for their convention four years ago, the event was overshadowed by tensions between Hillary Clinton and Bernie Sanders. This time, all efforts were made to ensure that differences between the progressive and centrist wings of the party were kept under wraps. But there was unrest. Supporters of left-wing congresswoman Alexandria Ocasio-Cortez, known as AOC, asked why she was given only one minute of speaking time – particularly when Republicans such as John Kasich, former Ohio governor, spoke for longer. Biden too made minimal references to more left-wing policy perspectives during the convention, no doubt disappointing Republicans eager to paint him as an empty vessel for the “radical left”. While mumblings of discontent over AOC were kept in check, the demands of the progressive flank of the party will likely resurface post-election.

Almost four years since Barack Obama left the White House, America’s first black president and his wife Michelle still have star quality. Their speeches this week show why. Michelle Obama’s opening night address distilled the essence of her appeal to millions of people – a no-nonsense, relatable person (“you know I hate politics” she said at one point) who nonetheless remains hopeful about the innate goodness of all Americans. Her tone of restrained exasperation with the presidency of Donald Trump, coupled with an urgent appeal to Americans to vote, captured the mood of many in the country.

Her husband delivered his speech from Philadelphia, the birthplace of the constitution, on Wednesday night. It was former president Obama’s most direct attack to date on his successor. Trump, he said, had “shown no interest in putting in the work; no interest in finding common ground; no interest in using the awesome power of his office to help anyone but himself and his friends”.

Like his wife, his speech also contained an instruction to the millions of Americans watching – to exercise their right to vote in November. Such was the power of Obama’s oratory that he arguably overshadowed vice-presidential nominee Kamala Harris who spoke directly after him. Reportedly, Obama had been slated to close the events, but insisted that Harris be given the final slot.

Jill Biden may be known to many Americans having served as second lady, but her appearance at the convention will have endeared her to many more. In an innovative take on the traditional convention speech, she delivered her address from an empty school in Delaware.

“When I taught English here at Brandywine High School, I would spend my summer preparing for the school year about to start filled with anticipation, “ she began, looking deep into the camera. “But this quiet is heavy. You can hear the anxiety that echoes down empty hallways. There’s no scent of new notebooks or freshly waxed floors,” she said, instantly connecting with millions of parents around the country.

But it was her husband who ultimately was the stand-out contributor. So much was riding on Joe Biden’s speech. He rose to the occasion.

Less a convention speech than a presidential address, the content and his delivery quietened those who doubted his mental acuity and ability. The challenge in the next 10 weeks will be to ensure that he continues to reach the bar he set on Thursday night.