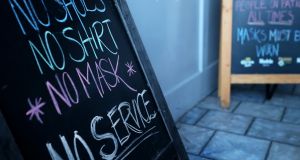 Like many towns and cities across America, Newport has long been a mecca for J1 students. Photograph: Maddie Meyer/Getty

Nestled on a cove in the pretty New England state of Rhode Island, Newport has long been a destination for wealthy American holidaymakers.

Edith Wharton, the incisive chronicler of New York high society, bought an oceanfront property in the town in 1893. It offered the novelist an excellent perch from which to observe the follies and vanities of rich New Yorkers. Some of the great titans of American commerce holidayed here. Grand mansions such as The Breakers – built by the Vanderbilt family and later frequented by the Kennedys – offer a reminder of the Gilded Age glamour of that time.

Today, Newport, between Massachusetts and Connecticut, is still an attractive holiday destination.

Having taken a strict approach to controlling the coronavirus pandemic – Rhode Island’s governor Gina Raimondo incurred the wrath of her New York counterpart Andrew Cuomo when she ordered officials to flag down cars with New York number plates in March – the town is now opening up for tourists.

On this picture-perfect day, couples and families are walking through the small streets near the harbour. As other cities along the east coast post record temperatures – a “heat emergency” was declared in Boston and Washington DC this week – the warm breeze offers a welcome respite.

While all festivals in the town have been cancelled, hotels and guest houses are starting to open their doors. Social distancing precautions are in place, with most places offering “contactless” check-in.

Masks are obligatory – both indoors in shops and restaurants, and outdoors on most streets. Compliance is virtually 100 per cent. At the wharf area, tourists line up to take harbour boat tours, while restaurants offer a mix of indoor and outdoor dining. Contact tracing is in place as a matter of course, and most eateries have adopted the latest in restaurant technology – diners now must scan a QR code in their phone to access a menu.

Like many coastal towns and cities in the east, Newport is benefiting from an uptick in demand from restless Americans tired of lockdown and limited to “staycation” vacations. Demand for house rentals has soared, with the result that it is increasingly difficult to find summer bookings along the east coast where coronavirus rates are low.

There is another notable difference from previous years. Like many towns and cities across America, Newport has long been a mecca for J1 students. For decades, college-age students from Ireland and elsewhere have been drawn to the US to earn money in the summer months and experience American life and culture. This year Trump’s travel ban, which effectively stopped the issuance of most visas including the J1 summer work and travel programme, has called a halt to the annual summer ritual.

Michael Jenkins is general manager of Clarke Cook House, a popular restaurant and bar on the city’s wharf. Like many running restaurants in Newport, he is actively looking for staff. “We’re scrambling for workers,” he says.

While Clarke’s for many years employed Irish students, he says fewer Irish had been coming to Newport in recent years as the economy improved in Ireland. This year, the restaurant had offered jobs to about 25 J1 students from eastern Europe, but they were unable to travel.

“Seasonal immigration is such a huge component of American life, a huge component of our culture,” he says, dismissing Trump’s argument that foreign nationals on summer visas compete with Americans for jobs. Some of the positions are being filled by American students whose own plans for travel and work placements have been thrown into limbo by coronavirus, he explains, but there are still plenty of vacancies.

Business this year is down by about 50 per cent, he says, with restaurant capacity at 50-60 per cent due to social distancing. “The bar, where most of the fun happens, is completely shut unfortunately,” he says, though he welcomes the recent pick-up in trade.

As for J1 students, any hope that the travel ban might be lifted before the end of summer has long dissipated.

Though the number of Irish participating in the J1 summer programme has fallen in recent years – 3,392 last year, compared to more than 8,000 in 2013, in part reflecting stricter work requirements demanded by US authorities and the availability of other programmes – it still offered an invaluable opportunity to work in the US, a prospect that is increasingly difficult in Trump’s America.

For the class of 2020, the temporary demise of the J1 visa means another rite of passage has fallen victim to coronavirus.