A defiant Donald Trump has accepted the Republican nomination for a second term as US president with a scathing attack on rival Joe Biden. Video: Reuters 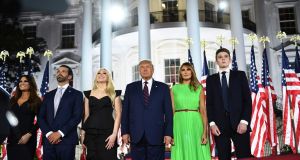 US president Donald Trump with family members watches fireworks on the final day of the Republican National Convention on the South Lawn of the White House. Photograph: Brendan Smialowski

The Republican National Convention culminated on Thursday night with Donald Trump’s acceptance of his party’s nomination for the presidency, bringing to a close the four-day event. Here are some highlights of the week.

Despite reports that Republicans were ill-prepared for the mostly virtual convention, the Trump campaign pulled off an impressive feat. As a former reality TV star, Trump is attuned to the power of television – two producers of The Apprentice were involved in planning the convention – and the result was a slickly produced event. Each night opened with a glossy video montage, scored by lush strings and a voiceover by actor Jon Voight, the father of Angelina Jolie who received the National Medal of Arts from Trump last year.

Donald Trump’s daughter, Ivanka, may have coined a new phrase for her father – the people’s president – but much of the controversy this week surrounded the use of the White House. The People’s House, as it is colloquially known, is not supposed to be used for partisan political events, but this week we saw Trump harness the full power of the presidency for political means.

Melania Trump delivered her speech from the Rose Garden, and Trump hosted a naturalisation ceremony for five immigrants who were sworn-in as American citizens. It later emerged some of the participants did not know that they would feature in the Republican convention.

But it was Thursday evening’s closing event that attracted most censure, as approximately 1,500 guests, exercising no social distancing, gathered on the South Lawn to hear the president accept his party’s nomination, culminating in a lavish fireworks display and opera performance.

When the Republican National Committee unveiled its one-page policy platform on the eve of the convention, it was clear that the Republican party had become the party of Trump. In a break with previous elections, the party did not produce a new policy platform, but rather published a resolution pledging to “continue to enthusiastically support the president’s America-first agenda”.

This week saw the president lean heavily on his own family for endorsements as many of the big names of Republican politics stayed away. All four of his adult children spoke at the event, as well as his daughter-in-law, Lara Trump, and his wife, Melania. His son’s girlfriend, Kimberly Guilfoyle, delivered one of the most memorable speeches of the week, dramatically declaring to an empty hall that “the best is yet to come”.

While Trump’s support with his core base of supporters remains steady, this week saw an effort by the president’s campaign to reach out to wavering voters – particularly women and people of colour.

The convention heard from several African-Americans, including Alice Johnson, the grandmother whose life sentence in prison ended after Trump granted her clemency, and Kentucky’s attorney general Daniel Cameron who attacked Joe Biden for his controversial “you ain’t black” comment, which suggested that black people could not vote for Donald Trump. “You can’t tell me how to vote because of the colour of my skin,” he said.

Similarly, several prominent women spoke at the event, including White House adviser Kellyanne Conway and press secretary Kayleigh McEnany, in a not-so-subtle effort to appeal to suburban women voters, a constituency in which Trump is struggling. In a bid to personalise the president, they relayed anecdotes about Trump’s character. Their message was clear – you may not like some of Trump’s language and use of Twitter, but it’s okay to vote for him in November.

If Donald Trump was the star of this week’s convention, his Democratic rival Joe Biden was cast as the bogeyman. Trump mentioned Biden by name more than 40 times in his somewhat rambling acceptance speech. “No one will be safe in Biden’s America,” he declared, a phrase that neatly encapsulates what promises to be Republicans’ attack line in the next few months.

The fact that this week’s convention coincided with an eruption of urban unrest in Wisconsin following the police shooting of Jacob Blake may have benefitted Republicans, who have been keen to stress their law-and-order credentials.

While the effort to focus on police funding may be an attempt to deflect from the coronavirus pandemic, the message may well resonate with some of the suburban voters who swung towards Democrats in the 2018 midterm elections, but whom Republicans are hoping to win back. Contributions from ordinary Americans who lost loved ones to crime were some of the most powerful moments of the week.