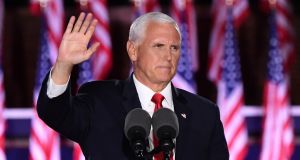 US vice-president Mike Pence weighed in on the violence unfolding in Wisconsin following the shooting of a black man on Sunday, as he accepted the Republican Party’s nomination for vice-president on Wednesday night.

Declaring that “law and order is on the ballot” in November’s election, he said: “We will have law and order on the streets of America.”

“The hard truth is, you won’t be safe in Joe Biden’s America,” he declared on the third night of the Republican National Convention.

“President Donald Trump and I will always support the right of Americans to peaceful protest, but rioting and looting is not peaceful protest, tearing down statues is not free speech. Those who do so will be prosecuted to the fullest extent of the law.”

He continued: “Last week, Joe Biden didn’t say one word about the violence and chaos engulfing cities across this country. Let me be clear: the violence must stop . . . We will have law and order on the streets of America, and for Americans of every race, creed and colour.”

Claiming that Joe Biden, the Democratic nominee, supports cutting funding for law enforcement, he said that Mr Biden will “double down on the very policies that are leading to unsafe streets and violence in America’s cities”.

Mr Pence was speaking as violent protests took place in the city of Kenosha, Wisconsin, following a police shooting at the weekend which left a 29-year-old African-American man, Jacob Blake, paralysed. Since then, the city has witnessed unrest, looting and violence, culminating with the shooting dead of two men on Tuesday night after armed civilians clashed with Black Lives Matter demonstrators.

A 17-year-old white male is being held in custody in connection with Tuesday’s homicides. It has been reported that he is a Trump supporter and a gun advocate.

Earlier in the day President Donald Trump, who joined Mr Pence on stage at the end of his speech, ordered federal troops to Wisconsin, warning: “We will NOT stand for looting, arson, violence, and lawlessness on American streets.”

The unrest in Wisconsin is the latest flashpoint in America’s increasingly divisive conversation about race and racial inequality, since the death of African-American man George Floyd at the hands of police in May.

‘A nation of miracles’

Mr Pence delivered his address at Fort McHenry, the site of the famous American victory against the British navy in 1812.

During his speech on the third night of the Republican National Convention, he said that America “is a nation of miracles”, predicting the production of a coronavirus vaccine by the end of the year.

He also hit on some of the key policy priorities of the first Trump term, including the decision to move the US embassy in Israel from Tel Aviv to Jerusalem, and the war against Islamic State.

Among the other speakers on Wednesday night was White House aide Kellyanne Conway, who will leave her job at the end of the month. Much of it focused on what she described as Mr Trump’s empowerment of women – the latest effort by the Trump campaign to appeal to female suburban voters.

“A woman in a leadership role can still seem novel. Not so for Donald Trump,” Ms Conway said, noting that the president has a long history of appointing women to senior positions.

“He has stood by me, and he will stand up for you,” she said.

In a deeply personal moment, White House press secretary Kayleigh McEnany described how she had been told at the age of 21 that she had the BRCAII genetic mutation which gave her a very high chance of developing breast cancer, and chose to have a preventative mastectomy. She said that after her surgery in 2018, she received a phone call from Ivanka Trump, and later from Mr Trump.

Describing her experience as a new mother to a nine-month-old daughter, she said: “Choosing to have a preventative mastectomy was the hardest decision I have made. But supporting President Trump, who will protect my daughter and our children’s future, was the easiest.”

“I want my daughter to grow up in Donald Trump’s America.”

Lara Trump, the wife of Mr Trump’s son Eric, described her first meeting with the Trump family, calling them “warm and caring, hard workers and down to earth”.

“What I learned about our president is different than what you might have heard. I learned that he is a good man, that he loves his family, that he didn’t need this job, that no one on earth works harder for the American people, that he’s willing to fight for his beliefs, and for the people – and the country – that he loves.”

Some well-known Catholics spoke on the third night of the convention, including surgeon Sister Deirdre Byrne, who described Mr Trump as “the most pro-life president in American history”.

Well-known former football coach Leo Holtz denounced Mr Biden as “Catholic in name only” over his position on abortion.