America Letter: As Brexit talks intensify, the US should contribute to the Irish unity debate 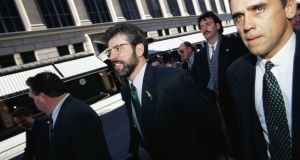 As Brexit threatens to raise its head again as negotiations intensify between British and EU officials, the impact on Northern Ireland will be keenly watched in the US.

Senior figures on Capitol Hill and in Irish-America are keeping a close eye on Brexit negotiations, and in particular any attempt by Britain to row back on commitments to preserve an open border on the island of Ireland.

Any move to jeopardise the Border arrangements prescribed by the Good Friday Agreement could see Irish-Americans in Congress veto a UK-US trade deal currently under negotiation.

New research published in the Journal of American Ethnic History sheds a light on the role played by Irish-America during a previous period in Northern Irish history.

The previously unpublished documents uncovered by Ted Smyth, chairman of the UCD Clinton Institute, include a confidential report from the Irish embassy in Washington during the 1980s, a decade that was critical to the emergence of peace in the North.

The report on Irish-American organisations was commissioned in 1980 by the Irish ambassador to the US Seán Donlon. With violence at a height in the North, its aim was to outline ways to channel Irish-American concern and anger away from support for the IRA towards a peaceful solution.

There was already a growing awareness of the potential of the Irish-American lobby to influence the British government, helped by the formation of a powerful coalition of Irish-Americans at the top of American political life including House speaker Tip O’Neill, senators Ted Kennedy and Patrick Moynihan, and New York governor Hugh Carey.

The embassy report reveals a major effort to influence Irish-America through the hundreds of Irish-American organisations dotted throughout the country. Irish officials attended parades, GAA matches, pubs and functions, delivering the message of the Irish government – that Irish unity should be achieved by peaceful means and not through fundraising for Noraid, the hardline organisation which openly supported the IRA. Engagement with US media was also a central strand of the strategy.

By the mid-80s, Sinn Féin was embarking on its own effort to persuade the Irish-American community that Republican politics was shifting direction and moving towards finding a political solution to the conflict. The second unpublished report documented by Smyth is a report on Irish-America commissioned by Gerry Adams and compiled by Declan Kearney and Oistin MacBride.

As Smyth details, the 180-page report contained scathing criticisms of Noraid. Sinn Féin was undoubtedly aware that Noraid was losing legitimacy in the US, underscored by the cool response by the US and Irish government establishment to the selection of Noraid leader Michael Flannery as the New York St Patrick’s Day parade grand marshal in 1983.

The US department of justice had also registered the group – which had an estimated 5,000 members, according to one study – as an agent of the Provisional IRA in 1981.

In December 1988, Adams, armed with the report, had a meeting with the Noraid national executive in Dublin, and told it the organisation would have to align with more “progressive” movements in the US. While many in Noraid saw this as a betrayal, Adams successfully sidelined the hardliners in the organisation, and the separate Friends of Irish Freedom group was formed. Ultimately, Noraid was brought into line and supported the 1994 IRA ceasefire and the Good Friday Agreement.

Those efforts to ensure Northern Ireland’s most influential supporters were on board ahead of the seismic events of the 1990s are an interesting reminder of the role played by Irish-America at a crucial stage in the peace process. Twenty-two years later, the threat posed by Brexit has reawakened interest in the issue.

Sinn Féin, newly resurgent in the Republic after its very strong performance in February’s election, is acutely aware of the continuing power of Irish-America. Adams, the former Sinn Féin president, took part in a virtual Irish Unity conference earlier this month, where he urged the diaspora to support a referendum on Irish unity.

The public expressions of solidarity with former INLA prisoner Malachy McAllister, who was deported to Ireland this month, from senior US figures is an indication of the support former participants in the armed struggle still command in the US.

As Northern Ireland looks ahead to the next stage in its history, ensuring that Irish-America remains in step with the views and political realities on the island of Ireland is essential if the US is to contribute constructively to the debate on Irish unity.