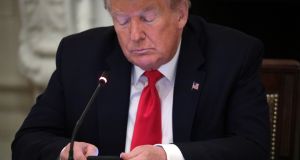 Twitter has flagged a video tweeted by Donald Trump, which contained a fake CNN news segment about a “racist baby”, adding a warning label that the post contained manipulated media.

The video, which had been doctored to make it appear as if it were a CNN broadcast, features two toddlers running and includes a fake graphic that reads “Terrified todler (sic) runs from racist baby”. The clip later accuses “fake news” of spreading misinformation.

Twitter added a label to the video, which was tweeted out by Trump late on Thursday evening, marking it as manipulated. Earlier in the day, Facebook removed Trump campaign ads that prominently featured a Nazi symbol.

This latest move from Twitter comes after Mr Trump signed an executive order last month designed to narrow protections for social media companies over the content posted on their platforms.

Although Twitter had taken a largely hands-off approach to the president’s controversial tweets, in recent weeks the company began adding a label that fact-checked misinformation amplified by the US president, as well as a note cautioning that a post glorified violence.

The company’s policy prohibits sharing videos that have been “deceptively altered”, which is what earned the video sourced from a pro-Trump meme creator a warning label. The platform previously enforced the policy when the White House social media director, Dan Scavino, posted a manipulated video that made it appear as if Joe Biden had endorsed Mr Trump.

Later on Thursday night, the president posted another video, which included another apparently manipulated CNN clip. The video again accuses journalists of amplifying fake news, and misconstruing what happened when a white Trump supporter chased after an Uber driver.

The manipulated toddler video shared by the president remained unlabelled on Facebook. Earlier this month, Facebook employees staged a virtual “walkout” over CEO Mark Zuckerberg’s decision to leave up a post from Mr Trump that appeared to encourage violence against demonstrators protesting police brutality.

Mr Trump invoked the phrase, “when the looting starts, the shooting starts”, which dates back to the civil rights era, when it was used by a segregationist politician and white police chief justifying a crackdown against protestors. Twitter hid the message behind a grey box.

Twitter previously labelled a Trump post about fraudulent mail-in ballots with a message that reads, “Get the facts about mail-in ballots”, and redirected the public to news articles fact-checking Mr Trump’s false claims.

The social network has also removed Trump tweets for copyright infringement after Mr Trump used unlicensed music in an advert featuring music from the film Dark Knight Rises and in a video set to the song Photograph by the band Nickelback. – Guardian