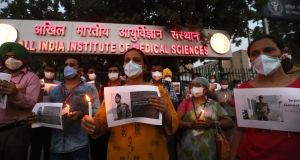 Resident Doctors of the All India Institute of Medical Sciences (AIIMS) hold a candle light vigil as they pay tribute to Indian soldiers who were killed in border clashes with Chinese soldiers in Ladakh, in New Delhi, India. Photograph: Rajat/Gupta/ EPA

The US offered condolences to India on Friday over the deaths of 20 Indian soldiers killed in vicious hand-to-hand combat with Chinese troops during a clash on the two Asian giants disputed mountainous border earlier this week.

Tensions remain high, despite the two governments agreeing they would seek to de-escalate the confrontation in the western Himalayas, after the deadliest clash between the two nuclear-armed countries in more than five decades.

Since the clash, military officials have held talks but there is no sign of a breakthrough.

“The situation remains as it was, there is no disengagement, but there is also no further build up of forces,” said an Indian government source aware of the ground situation.

And a day after the funerals of some of the soldiers, the public mood was hardening in India, with growing calls for revenge and a boycott of Chinese-made goods.

With his nation in shock over the loss its soldiers lives, Prime Minister Narendra Modi faces one of the most difficult foreign policy challenges since he came to power in 2014.

Having actively sought greater economic engagement with China, Mr Modi is compelled to review the state of those ties, just at a time when the United States relations with Beijing have also deteriorated.

“We extend our deepest condolences to the people of India for the lives lost as a result of the recent confrontation with China,” US secretary of state Mike Pompeo said in a message posted on Twitter.

“We will remember the soldiers’ families, loved ones, and communities as they grieve.”

As a non-aligned nation, India has always sought to balance the influence of super-powers, while maintaining an independent course in foreign policy matters.

But in the past two decades, New Delhi has built closer political and defence ties with Washington, and the US has become one of India’s top arms suppliers.

In the wake of the rising tensions with Beijing, there are rising calls from top former Indian diplomats for an even tighter relationship with the United States and its allies such as Japan to help face the economic and military might of China.

“This is an opportunity for India to align its interests much more strongly and unequivocally with the US as a principal strategic partner and infuse more energy into relations with Japan, Australia, and ASEAN,” former foreign secretary Nirupama Rao wrote in The Hindu newspaper.

India has accused the Chinese troops in the Galwan Valley of acting in a premeditated manner, attacking Indian soldiers with iron rods and batons studded with nails. Scores of Indian soldiers were injured in the clash on Monday evening and India said the Chinese military also suffered casualties.

India and China have been facing off against each other at three locations including Galwan since early May after India said Chinese troops intruded into its part of the poorly defined Line of Actual Control, which makes the de facto border.

China rejects the Indian claims of incursions and blamed the clash on frontline Indian soldiers crossing into Chinese territory.

Satellite images, however suggest, that in the days leading up to the clash, China brought in heavy machinery, cut a trail into a Himalayan mountainside and may have even dammed a river.

The images, shot on Tuesday, a day after soldiers engaged in hand-to-hand combat in the freezing Galwan Valley, show an increase in activity from a week earlier. –Reuters