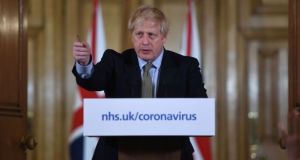 The UK’s chief medical officers have agreed that the Covid-19 threat level should be lowered one notch to “epidemic is in general circulation” from “transmission is high or rising exponentially”. File Photograph: Eddie Mulholland/Daily Telegraph/PA Wire

The UK on Friday lowered its coronavirus alert level, raising hopes that ministers will soon cut the contentious 2-metre social-distancing rule that business leaders claim is holding back the economy.

Health secretary Matt Hancock hailed the shift from level 4 to level 3 as a “big moment” and said the government was “getting the country back on her feet”.

Level 3 means that the virus is in “general circulation” whereas level 4 means transmission is high or rising exponentially.

The shift to level 3 was recommended by the government’s joint biosecurity centre and endorsed by the chief medical officers in England, Scotland, Wales and Northern Ireland.

Mr Johnson last Sunday announced a review of the 2-metre social-distancing rule, involving economists and scientists, but he is under pressure from many Conservative MPs to scrap it immediately to help revive the economy.

“Scientists now believe that this is over the top and other countries have already gone to 1 metre,” he said. “It is long overdue time for us to get this down, so businesses, schools and hospitals can start functioning at full capacity.”

Business groups have warned that the rule will prevent at least a third of pubs and restaurants from reopening, risking the collapse of thousands of companies.

More than 1m jobs in pubs, restaurants and hotels would be threatened if the rule remained unchanged, according to Kate Nicholls, head of the trade body UKHospitality.

Under the government’s “road map” for lockdown easing in England that was published in May, the hospitality industry is due to reopen no earlier than July 4th. This timetable has yet to be confirmed by ministers.

Pub owners said they are running out of time, with some threatening to break the law by reopening on July 4th regardless of the government guidance.

“I’m opening on 4 July, even if it means I’m in jail on [the] fifth by breaking the law,” said one pub landlord. “A host of businesses are going to the wall this week, some amazing operators, and unless we get to open the industry is going to implode.”

Small business owners fear that they could be disproportionately affected by the 2-metre social-distancing rule.

In a letter to business secretary Alok Sharma, the Federation of Small Businesses said that up to a fifth of companies “do not believe they can reopen in a way that is compliant with current advice on working safely including social distancing”.

Many small businesses, it added, regarded the 2-metre social-distancing rule as the largest barrier to reopening.

“Small businesses tend, on the whole, to have small premises, and there are many small shops additionally where small businesses cannot open,” said the FSB.

Meanwhile, the government is edging closer to agreeing “travel corridors” with some European countries including France, Spain, Portugal and Greece.

These nations could then be exempted from the UK’s requirement that people arriving in the country go into quarantine for two weeks.

Ministers are hoping to be able to announce travel corridors with some European countries on June 29th, with the arrangements taking effect on July 4th, the Daily Telegraph reported.