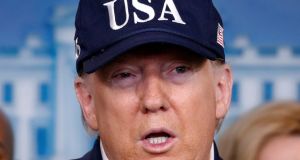 Journalists had their temperatures taken by medical officials in the White House ahead of Saturday’s press conference where the US president Donald Trump announced the extension of the travel ban to Ireland and Britain. Photograph: AP Photo/Alex Brandon

US president Donald Trump has cited Ireland’s open border with Britain as a key reason for including Ireland in the travel ban as America battles to contain the spread of coronavirus.

Mr Trump announced at the weekend that Britain and Ireland were being added to the travel ban, days after announcing a similar ban on countries in the Schengen zone.

It also said that the Centre for Disease Control (CDC) had determined that the Republic of Ireland is experiencing “ongoing sustained person-to-person transmission of SARS-CoV-2”.

“As of March 13th, 2020, the World Health Organization reported that the Republic of Ireland had 70 cases of COVID-19, five times more cases than there were seven days prior,” it states.

Similarly the White House highlighted the exponential increase in cases in the United Kingdom.

“The potential for undetected transmission of the virus by infected individuals seeking to enter the United States from the United Kingdom and the Republic of Ireland threatens the security of our transportation system and infrastructure and the national security,” it stated.

The new restrictions come into effect at 4 am on Tuesday Irish time.

While technically flights between the United States and Ireland will continue, any travellers who have been to European countries in the previous 14 days will not be permitted to enter the United States.

Exemptions apply to US citizens, green card holders and their families, and certain classes of non-nationals – for example diplomats and airline crew.

But returning US citizens and legal permanent residents must enter through 13 specially-designated airports in the US and be screened. As the travel ban entered into effect at the weekend, US airports reported huge delays and queues as the US transport system struggled to implement the new screening requirements.

Airlines are expected to drastically cut their services in the coming weeks, with American Airlines already announcing plans to reduce its international capacity by 75 per cent until May 6th.

Meanwhile, the White House began testing journalists and officials who have close contact with Mr Trump on Saturday, two days after Taoiseach Leo Varadkar met Mr Trump in the Oval Office on Thursday.

Mr Trump tested negative for the virus, despite having stood beside at least one person who has contracted the disease at his Mar-a-Lago estate in Florida just over a week ago.

Journalists had their temperatures taken by medical officials in the White House ahead of Saturday’s press conference where Mr Trump announced the extension of the travel ban to Ireland and Britain. One reporter was removed from the West Wing after showing an elevated temperature.

“Out of an abundance of caution, temperature checks are now being performed on any individuals who are in close contact with the president and vice-president” a White House spokesman said.

No journalists or officials were tested before entering the Oval Office for Mr Varadkar’s meeting with Mr Trump.