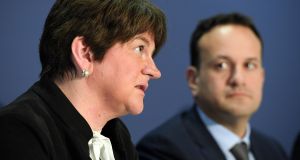 After the North-South ministerial meeting in Armagh at the weekend DUP leader Arlene Foster said ‘calm heads’ are needed during this time. Photograph: Photopress

The Northern Executive is meeting on Monday to decide whether to escalate its response to the coronavirus emergency as 16 new cases were confirmed over the weekend, bringing the number of cases in Northern Ireland to 45.

The North’s Department of Health advised people with “mild symptoms” such as a new persistent cough and/or fever to stay at home and self-isolate for seven days. It said in such cases testing would not be required.

Executive Ministers are to meet at Stormont on Monday amid continuing differences between the DUP and Sinn Féin on how to deal with Covid-19, and when to close schools and universities.

Ministers from the North and South met in Armagh on Saturday to discuss coronavirus. First Minister Arlene Foster and Sinn Féin Deputy First Minister Michelle O’Neill held firmly to opposing views on whether schools, universities and childcare facilities should be closed in Northern Ireland, as happened in the Republic.

In the North Sinn Féin and the SDLP have called for school closures, as has Catholic primate Archbishop Eamon Martin and the Irish National Teachers’ Organisation.

The DUP and Ulster Unionist Party said they would follow the advice of the North’s chief medical officer Dr Michael McBride who says the time is not yet right for such action.

However, Ms Foster made it clear, without mentioning a date, that schools and colleges would close and were likely to remain shut until early September or late August. “When we do close the schools they will be closed for at least 16 weeks. Then of course you are into the summer period, so they will be off school for a very long time,” said Ms Foster.

Ms O’Neill, however, called for immediate action in line with the Republic. “Disease knows no border. We have to work on all-island collective basis in what is an emerging crisis.”

While assuring there would be continuing strong co-operation between Dublin and Belfast, Mr Varadkar said it was inevitable there would be differences in approach to tackling the crisis. “What there isn’t any difference about is our common objective, which is to slow down this virus in its tracks and push it back as much as possible and limit the harm to human health and human life.”

All 10 special needs schools in Belfast are to close indefinitely from Monday because of coronavirus. A number of other schools in the North have announced short term closures.

Meanwhile, the unnamed mother of a child in Co Armagh is threatening legal action to compel the closure of all schools in Northern Ireland, which unlike in the Republic remain open.

Solicitor Darragh Mackin of Belfast firm Phoenix Law, who is representing the woman, said the departments of education and health in the North have been put on notice of an impending emergency judicial review.

“Our client’s daughter suffers underlying health problems, including severe asthma and therefore is at a greater risk of harm should she contract the coronavirus,” said Mr Mackin.

“It is our client’s case that the current position is unlawful and contrary to the necessary protections afforded to all citizens under the human rights act. For these reasons, we have been instructed to put the various public bodies on notice of our intention to apply for judicial review,” he added.

“It is a deplorable situation when a mother has to initiate urgent legal proceedings to ensure that her child, and indeed children across the jurisdiction, are afforded the necessary protections and safeguards required under law.”

Some Northern Ireland councils and businesses have introduced their own measures to limit the spread of the virus.

All council-owned buildings in Derry and Strabane, including leisure facilities, community centres and sports pitches, have been closed to the public, as have some Belfast City Council-owned venues, including City Hall and Belfast Zoo.