Coronavirus: Government calls on all pubs and bars to close from tonight 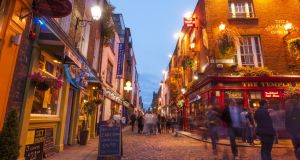 All pubs and nightclubs in Temple Bar in Dublin will close their premises with immediate effect ‘in the interest of public health’ and following advice from the Garda and health authorities. Photograph: iStock

The Government is calling on all pubs to close from tonight until at least March 29th in an effort to stem the spread of coronavirus.

The request was made following a meeting at Government Buildings with the Vintners Federation of Ireland and the Licensed Vintners Association, which represent the country’s 7,000 pubs. The announcement covers all public houses and bars, including hotel bars.

The vintners told the Government that they had “real difficulty” implementing the guidelines introduced last week limiting social contact and keeping crowds below the recommended limit of 100 in an indoor setting, given that pubs promote “social interaction”.

In addition, the Government has asked members of the public not to organise or participate in any parties in private houses or other venues, which would put other people’s health at risk.

The vast majority of the public and pub owners complied with last week’s request, the Government acknowledged, but it made the new request as it believed it was important that all pubs be closed ahead of St Patrick’s Day on Tuesday, traditionally one of the busiest days for the pub trade.

The closure of pubs was recommended after video was shared on social media over the weekend showed a packed pub in Temple Bar, Dublin, flouting the Government’s advice on social distancing and that indoor gatherings of more than 100 people be cancelled.

“The Government, having consulted with the chief medical officer, believes that this is an essential public health measure given the reports of reckless behaviour by some members of the public in certain pubs last night,” the Government’s official statement said on Sunday.

The effectiveness of the social distancing guidelines in other parts of the hospitality and leisure industry such as in restaurants and cinemas will be kept under review over the coming days.

The two vintners groups supported the Government’s decision and urged all members to close in line with the request. Both sides discussed support measures for affected businesses and staff.

“The Government will continue to monitor the situation, including the compliance of all pubs with this request, as well as any further or different measures which might be required in the future,” said the Government in the statement.

Not far from here, nurses & doctors are working to prepare for the impact of a global pandemic. Everyone is working 24/7. This is an insult to their efforts. There is very clear public health advice. Follow it. All options will be kept under constant review #CoronaVirusUpdates https://t.co/XQvJ7tC13D

Earlier all pubs and nightclubs in Temple Bar, the popular nightlife district of Dublin, announced they would close with immediate effect, the company that manages the area said.

The company said that it was making the decision “in the interest of public health” and following advice from the Garda and the health authorities.

The decision came in the wake of mounting public and political outrage after video footage posted on social media.

“This decision was taken in light of the experiences of members of The Temple Bar Company over the last few days when it proved impossible to follow the public health advice to limit numbers and adequately implement measures on to control social distancing,” the firm said.

Minister for Health Simon Harris said the move by all bars and clubs in Temple Bar to close voluntarily with immediate effect was a “sensible decision”.

Mr Varadkar tweeted on Sunday morning that the Government’s direction that “no indoor mass gatherings of more than 100 people applies to pubs and clubs”.

He said he had asked the State’s National Public Health Emergency Team for “further expert guidance on this” and that he “may seek enforcement powers from Dáil/Seanad”.

“People who have been out this weekend should avoid physical contact with seniors or people with chronic diseases. You could make them very, very sick,” Mr Varadkar tweeted.

It comes as the head of the HSE, Paul Reid, called on people to “cop on” and comply with public health advice.

Mr Harris described the video circulating on social media as an “insult” to the efforts of nurses and doctors working to prepare for a pandemic.

The head of the Restaurants Association of Ireland on Sunday urged the Government to announce “a lockdown” of all licensed premises for at least two weeks.

Adrian Cummins, chief executive of the Restaurants Association of Ireland, made the call after making a dramatic appeal for action to the Government on Saturday, warning that “social distancing” was not being observed by customers.

Staff were being put at risk, he said in a post on social media. “The decisions we make in the next two weeks will be for the next 100 years in the country. We need to make tough, tough decisions now for the safety of people, our families, our staff and our nation,” Mr Cummins told The Irish Times on Sunday morning.

The Government on Sunday night announced new measures that will allow employers to keep paying workers at least the jobseeker rate of €203 a week if companies have to cease trading amid the coronavirus outbreak.

The move will allow all employees who lose work due to the Covid-19 pandemic to continue receiving income and to retain their link with employers. The system will allow employees to be paid quickly and enable employers to claim refunds on these payments from the State.

The Department of Employment Affairs and Social Protection is also simplifying the application process for jobseeker’s allowance to encourage people to apply online. This will help keep people away from social welfare offices where queues could form, which could increase exposure to the virus.