The US president Donald Trump declared a state of emergency as the number of cases of coronavirus continued to rise in the United States but was previously criticised for tackling of the public health emergency. Video: The White House/As credited. 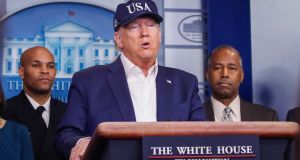 Paging Proust. For me, this is the week when memories rush back from childhood: watching my parents get gussied up for St Patrick’s Day parades and banquets, green carnations pinned to their lapels; the family’s annual excursion to the Tidal Basin to catch the fleeting pink splendour of the cherry blossoms.

Washington’s most beautiful season is blooming outside while we get herded inside, making the dread and decay feel particularly disorienting. The landscape is flourishing while a scary plague – and the fumbling response to it by Donald Trump and parts of the federal government – is infecting our nation, causing it to wilt and contract.

The most totemic parts of America – Broadway, Hollywood, Disneyland, March Madness, the Masters, baseball spring training, the Met, late-night comedy shows, tours of the Capitol, Tom Hanks – are shut down as we struggle to figure out what, exactly, we’ve got on our Purell-soaked hands here. Meanwhile, the spectre of death speeds across the globe, Appointment at Samarra-style, ever faster, culling the most vulnerable.

Cruise ships are docked, schools are closed and the presidential primaries are at risk, with Louisiana becoming the first state to delay its vote. Even my bosses at the New York Times put a lid on the newsroom and told us all to scram into cyberspace.

The cataclysmic changes this past week have been a shocking and humbling reminder of how fragile we humans are, as we see our entire ecosystem vanish

The stock market, our swaggering symbol of financial health and Trump’s best asset, has become a neurasthenic Victorian lady prone to taking to her fainting couch. The days grow longer even as the darkness spreads, throwing into harsh relief just how tattered our social safety net has become for so many Americans, who are now panicked about how to pay bills, keep businesses open and safeguard the lives of parents and grandparents.

The cataclysmic changes this past week have been a shocking and humbling reminder of how fragile we humans are, as we see our entire ecosystem vanish when confronted with a deadly pathogen pretty enough when seen under a microscope to be a spring blossom.

Until now Trump has mostly succeeded in covering up things that could damage him – from taxes to pay-offs to paramours during the campaign to blocking evidence and witnesses in his impeachment to his conversation with Vladimir Putin where the interpreter’s notes disappeared.

But a global pandemic is different. He can’t cover up his lack of empathy, his instinct to mislead, his refusal to do his homework and his blame-shifting. And the idea that Trump could soothe a nation went out the window a long time ago.

He can’t cover up the fact that he is not interested in public policy fixes or ending his juvenile sniping across the aisle. After he woodenly said in his national address last Wednesday that “we must put politics aside, stop the partisanship and unify together as one nation and one family”, he jumped back on Twitter to trash Barack Obama and Joe Biden, this time criticising their response to the swine flu virus.

His attempt at maturity was crystallised in one soundbite. “No, I don’t take responsibility at all,” he said

Trump is only interested in spinning public appearances to create the impression that he’s in charge. As always, such forums offer a fantastic floor to show just how low Mike Pence will limbo. By now, Trump is surely jealous of Pence’s good reviews and requires extra obeisance.

Even when the president stopped being so blithe about the virus, even after his error-ridden national address and his press conference on Friday declaring a national emergency – “two very big words” – his attempt at maturity was crystallised in one soundbite. “No, I don’t take responsibility at all,” Trump said, when asked about the egregious lag in testing.

It was far from his tweet in 2013, when he loved trolling Obama: “Leadership: Whatever happens, you’re responsible. If it doesn’t happen, you’re responsible.” Under the pink blossoming trees on Friday, he trumpeted, “We’ve learned a lot, tremendous amount has been learned.” Neat!

But think of the tremendous amount he could have learned much sooner had he not disbanded the White House pandemic office in 2018. When Yamiche Alcindor of PBS asked him about the valuable time lost because of that inexplicable decision, Trump bristled at the sound of a voice that dared pierce his cocoon of sycophancy.

“I just think it’s a nasty question,” he snapped back. “When you say me, I didn’t do it. We have a group of people. I could ask perhaps my administration” because “I don’t know anything about it”.

Trump’s press conference began to fall apart in real time, as he fell into his natural role as snake-oil salesman

Even surrounded by the experts, Trump continued to send mixed signals. Despite the fact that he has come in contact with people who have tested positive for the virus, he was procrastinating on getting a test, refusing to self-isolate and still shaking hands with the corporate chieftains he had summoned.

Just like the address on Wednesday, Trump’s press conference began to fall apart in real time, as he fell into his natural role as snake-oil salesman. He bloviated about a website that Google was developing that was going “to be very quickly done, unlike websites of the past”, presumably a dis on Obama’s crash-happy healthcare website.

Trump’s fabulous website was, of course, too good to be true. A Google rep tweeted that the site was “in the early stages of development” and that the company planned to roll out testing in the San Francisco Bay Area “with the hope of expanding more broadly over time”.

Not exactly quick relief, Donald. For once, you are right. You don’t take responsibility at all. – New York Times