‘Herd immunity’ is not our policy, says UK’s health secretary 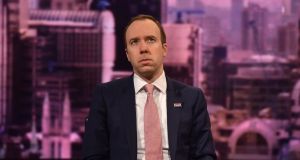 Health Secretary Matt Hancock has denied that his government wants to allow the majority of the population to be infected with coronavirus in order to develop immunity against it. Photograph: Jeff Overs/BBC/PA Wire

Britain’s health secretary has denied that his government wants to allow the majority of the population to be infected with coronavirus in order to develop immunity against it. Matt Hancock said the focus was on bringing the infection rate down and improving the National Health Service’s (NHS) capacity to deal with the epidemic.

“Herd immunity is not our policy. It’s not our goal. Our goal is to protect life and our policy is to fight the virus and protect the vulnerable and protect the NHS. And that’s what we’re doing. Now there is a, of course there’s a scientific debate around scientific concepts, but I want to be absolutely crystal clear that we will do what is necessary to protect life,” he told the BBC.

“The consequence of the infection rate rising too fast is very clear and that’s why we need to bring the infection rate down, at the same time as doing the work to increase the NHS capacity especially in the areas of most need, like ventilators.”

Mr Hancock’s intervention came as the Britain’s strategy faced criticism from scientists who warned that it risked allowing the virus to spread uncontrolled through the population. The government’s chief scientific adviser Patrick Vallence said last week that about 60 per cent of the population would have to become infected with the virus to develop herd immunity.

“Our aim is to try to reduce the peak, broaden the peak, not suppress it completely; also, because the vast majority of people get a mild illness, to build up some kind of herd immunity so more people are immune to this disease and we reduce the transmission, at the same time we protect those who are most vulnerable to it,” he said.

Mr Hancock confirmed that people over 70 and those with underlying conditions that make them more vulnerable would be asked to stay at home to avoid exposure to the virus. But Britain has yet to follow most other countries by banning mass gatherings or closing schools and it has not announced any plans to close restaurants, bars or entertainment venues.

The government will publish legislation on Tuesday that will give it powers to forcibly quarantine people infected with the virus who refuse to self-isolate. Mr Hancock denied that Britain was out of step with its European neighbours, saying the differences were mostly a matter of timing.

“We are similar to many countries. For instance, we are very similar to the approach being taken in Germany and Australia and others. It is about making sure you do the right thing at the right time. We are prepared to take, if we need to, all the sorts of measures but we will do it based on the science,” he said.

Britain’s supermarkets have called on shoppers not to buy more than they need after a surge in stockpiling of some items over the weekend and long queues at checkouts and even outside many large stores. In a joint letter to the public, British retailers said they were working with the government and suppliers to ensure that shelves were being restocked.

“We would ask everyone to be considerate in the way they shop. We understand your concerns, but buying more than is needed can sometimes mean that others will be left without. There is enough for everyone if we all work together,” they said.