Locals in Madrid, Spain have taken to their balconies to applaud health workers who are currently battling the coronavirus epidemic. Video: Reuters 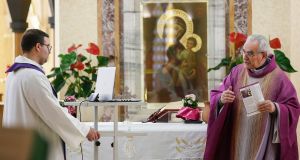 The parson of the church of St Maria Mater Dei, Don Falavio Peloso (R), during the streaming of a Mass on YouTube, in Rome, Italy. Photograph: Fabio Frustaci/EPA

Italy recorded 368 new deaths on Sunday from the Covid-19 coronavirus outbreak, as the total death toll rose to 1,809 from 1,441 a day earlier, the country’s civil protection authority has said.

The number of positive cases in the country rose to 24,747 from 21,157 a day earlier, as Europe’s worst outbreak of the deadly virus continued to expand.

France, Spain and Austria have joined Italy in imposing lockdowns on millions of people as the world sought to contain the spreading coronavirus.

The novel coronavirus has also taken a toll on church services, with the Vatican saying all papal Easter services will be held without the faithful attending, and general audiences and Sunday blessings will be held via internet and TV until April 12th.

Spain put its 47 million inhabitants under partial lockdown on Saturday as part of a 15-day state of emergency to combat the epidemic in Europe’s second-worst affected country after Italy.

Effective immediately, all Spaniards must now stay home except to buy food and medicines, go to work or to the hospital or for emergencies.

Streets in Madrid and Barcelona were deserted on Sunday. All major newspapers carried a front-page wrapper emblazoned with a government-promoted slogan: “Together we’ll stop this virus.” Buses in central Madrid were empty of passengers. Meanwhile, army specialists in protective suits sprayed disinfectant in train stations and police fined recreational cyclists.

Bars, restaurants and shops selling non-essential items are shut for 15 days as the country enters the state of emergency.

In a blow to Spain’s thriving tourist industry, all of its world-famous Easter processions are cancelled.

Britain on Sunday advised its citizens against all but essential travel to Spain.

France will shut shops, restaurants and entertainment facilities from Sunday with its 67 million people told to stay home after confirmed infections doubled in 72 hours.

In a later update on Sunday, France’s health minister said that 120 people had now died from coronavirus in France, up from 91 on Saturday. Oliver Véran told France 2 television that the number of cases had risen to about 5,400 cases, up from 4,449 on Saturday.

However, France went ahead on Sunday with nationwide elections to choose mayors and other local leaders despite the crackdown on public gatherings.

The government ordered unprecedented sanitary measures at polling stations. Organisers were under orders to allow a 1m gap between people in lines, and to provide soap or hydro-alcoholic gel and disinfectant wipes for voting machines. Voters were told to bring their own pens to sign the voting register.

Germany will temporarily introduce border controls on its frontiers with Austria, Switzerland, France, Luxembourg and Denmark from Monday, the German government said on Sunday, as the country seeks to curb a rapid spread of coronavirus.

As of Sunday, there were 4,838 cases of coronavirus in Germany, with 12 deaths, the Robert Koch Institute for infectious diseases said. That was a sharp rise from 3,795 confirmed cases, with eight deaths, a day earlier.

Meanwhile, Austria’s chancellor announced major restrictions on movement in public places on Sunday, banning gatherings of more than five persons and urging Austrians to self-isolate, as well as putting further limits on who can enter the country.

Restaurants are ordered closed from Tuesday, when new restrictions on entering the country will also take effect, a government spokesman said.

“Austrians are being summoned to isolate themselves,” chancellor Sebastian Kurz’s office said in a statement. “That means only making social contact with the people with whom they live.”

People should only leave the house for work that could not be postponed, to buy necessary food supplies and to help others, it said.

Police would be stationed at playgrounds and outdoors from Sunday, Mr Kurz told the APA news service, and would ask large groups to disband. The country had 800 cases and one death by early on Sunday, according to its health ministry. Austria also expanded its list of countries from which it is restricting entry, adding the UK, the Netherlands, Russia and Ukraine.

All Dutch schools, cafes, restaurants and sport clubs were ordered to be closed on Sunday as the government sought to prevent the further spread of coronavirus in the Netherlands. The step came as the number of confirmed coronavirus infections in the country rose by 176 to 1,135, with 20 deaths, the National Institute for Public Health said.

Hungary on Sunday confirmed its first official victim of the virus, state news agency MTI reported. A 75 year-old Hungarian national died shortly after being hospitalised with severe pneumonia and a suspected coronavirus infection.

Slovenia said it would shut down all public transport starting on Monday and planned to shut all but food shops and pharmacies. Estonia and Latvia confirmed they would close their borders to foreign nationals, except residents, from Tuesday.

Bulgaria will ban incoming flights from Italy and Spain as of midnight on March 17th as part of measures to contain the spread of coronavirus.

Elsewhere, US president Donald Trump declared a national emergency on Friday. The US has recorded more than 2,000 cases and 50 deaths, but has been criticised for slow testing.

The White House said the US would widen new travel restrictions on Europeans to include travellers in the UK and the Republic, starting Monday night.

China tightened checks on international travellers arriving at Beijing airport on Sunday, after the number of imported new coronavirus infections surpassed locally transmitted cases for a second day in a row.

China, where the epidemic began in December, appears to now face a greater threat of new infections from outside its borders as it continues to slow the spread of the virus domestically. – Reuters and agencies