Refugees in African camps worry about impact of coronavirus

There are almost 200,000 refugees in Kakuma alone, and they are relying on aid agencies to provide healthcare 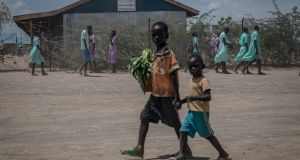 As Kenya, Ethiopia and Sudan announced their first cases of coronavirus on Friday, refugees hundreds of miles from African capital cities fretted their camps could become a death trap if the virus reaches that far.

“Of course I’m worried about it,” said a Somali woman in Kakuma refugee camp, northwest Kenya. “I think if it comes here in Kakuma there will be a high mortality rate because if it’s killing people in Europe and America what happens here in Africa, especially in a refugee camp? That will be worse.”

“If it reaches here there is no way to escape,” said an Ethiopian man, who also lives there.

Millions of refugees are living in refugee camps across Africa, usually far away from decision-making and centres of power. Many survive on minimal food rations, relying on aid agencies to provide healthcare.

In a joint statement on Thursday, UN high commissioner for human eights Michelle Bachelet and UN high commissioner for refugees Filippo Grandi called for migrants and refugees to be an “integral part” of plans for tackling the virus. “Many of these women, men and children find themselves in places where health services are overstretched or inaccessible. They may be confined to camps and settlements, or living in urban slums where overcrowding, and poorly resourced sanitation, increases the risk of exposure.”

The Irish Times spoke to seven refugees in Kakuma, where there are almost 200,000 refugees from across Africa. Five of them are currently in hospital, some with chronic health problems. All asked to remain anonymous so they could speak freely.

“We have many sicknesses here but the medication is not good,” said a Congolese woman. “No one will be safe here if coronavirus arrives.”

Interviewees said many families are big, and their shelters aren’t large enough to allow self-isolation. In schools, the students are crammed into classrooms. The one hospital for refugees in the camp is already packed.

An Ethiopian in his 20s said he has been in and out of hospital for the last three years with an ongoing health problem, and is concerned about the standard of healthcare.

“I think it is not too good. I can see now there are problems even accessing drugs, seeing the doctor and even getting referrals when you have a critical condition,” he said. “Today I am worried, you can see [talk about coronavirus] all over on the internet, on social media, and it is now affecting the economy in Europe. If it comes to the camp I think it will finish all the refugees because we will not have any way to prevent it.”

A spokeswoman for the International Rescue Committee aid agency, which runs the hospital in Kakuma, told The Irish Times it has already trained health workers on coronavirus, including teaching them how to protect themselves, and reminding them of proper hygiene practices and self-isolation procedures.

“We have increased surveillance for potential cases around the camp and reinforced infection, prevention and control at health facilities, as well as identified isolation units at the IRC-run General Hospital for potential Covid-19 cases.”

A South Sudanese man in the hospital, who coughed during his interview, complained there is sometimes a lack of medication for refugees who need it.

“I’m worried, especially with the health issues we have here in Kakuma. The health is very poor,” he said. “If the people in the western countries are struggling to treat this, what about us – people from Africa, Kakuma? What are we going to do? All of us will be dead. I’m just praying that it will not spread, hoping that God knows our prayers.”