Illegal Irish in the US prepare for the worst under Trump

‘I had a check-in with Homeland Security recently. The news was not good’

Donald Trump's presidency holds deep concerns for over 50,000 Irish people who are living in America illegally. Was his pre-election speeches all rhetoric or will he try to implement his draconian plans? Video: Enda O'Dowd 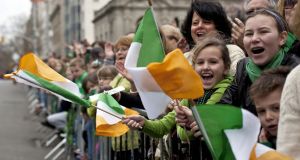 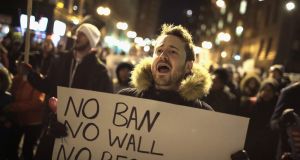 Demonstrators in Chicago protest against US president Donald Trump’s executive order imposing a ban on travel from seven Muslim-majority countries to the US. Photograph: Scott Olson/Getty Images 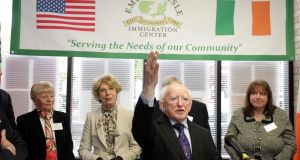 John Stahl sits behind his desk at the Emerald Isle Immigration Centre in Woodside, Queens, located over a bank and squeezed between two Irish pubs, Seán Óg’s and Saints and Sinners.

A 20-year veteran of US immigration law, Stahl has never been busier.

“Anyone who is in the system now is trying to speed up the process. We have never seen this kind of change in such a short time,” he says.

“The outpouring of support that happened at the airports buoyed people. They were comforted by it. But with the Trump administration, I fear the outlook is not good.”

During the presidential campaign, Trump made his opposition clear to the Obama-created programmes Deferred Action for Childhood Arrivals (Daca) and Deferred Action for Parents of Americans (Dapa), which offered a legal route to illegals to stay in the US.

“Now, even the J1 programme is now under threat,” says Stahl, whose work at the centre is supported by the Irish Government and by local charitable donations.

The Irish make up a tiny share of the 11 million people who are believed to be living illegally in the US, but they are existing in a world that is always filled with grey, forever fretful that their circumstances could changes in a moment.

No one can be identified, so all names have been changed.

David and Linda spoke to The Irish Times during a social event in the Bronx when they were visiting New York from their home in Massachusetts.

The two have been in the US for 15 years, having entered on a tourist visa. Though undocumented, both got good jobs.

When Linda became pregnant, they made a decision to stay, believing that the US offered them a better life despite their lack of papers.

The health services introduced in Massachusetts during Mitt Romney’s governorship meant that Linda was able to get healthcare along with her daughter.

However, it does not cover David, so he lives carefully.

“I don’t play sports and I drink a lot of smoothies,” he says.

Neither David nor Linda have social security numbers. They cannot apply for a driving licence, so they do not drive and they cannot risk flying.

They stay away from places where the Department of Homeland Security can do random checks – near borders and coasts, for example – which cover 60 per cent of the US.

However, they are lucky enough to live in “a sanctuary county”, which offers some protection from federal immigration agents as local police forces are barred from doing the work of immigration officers.

President Trump has signed an executive order withdrawing federal funding from “sanctuary cities”, though it is a move that could split Republican support for his administration as it threatens long-cherished state rights.

The Cork couple still retain much of the accent from their home county. Their daughter, Alannah, is now 13. She goes to a public school.

She goes to Mass on Sundays. Both her parents work. They have a good standard of living.

From the outside, they are a normal family. However, the instability in their lives is exposed by big family events. David was unable to attend his father’s funeral.

Recently, they booked a flight for Alannah to fly to Ireland on her own so she could be a flower girl at her aunt’s wedding.

Alannah started asking questions. Then, at school, she learned about the plight of undocumented immigrants.

She went home and asked her mother if they were in the country legally. Linda told her the truth.

David was at work. Linda called him and explained what had happened. Later, he said it was like a great weight had been lifted from him.

It was a day he had been dreading. Now that his daughter knows, he says he is more or less at peace with their circumstances.

The daughter now refers to them as “Bonnie and Clyde”. Now, with a common understanding of their situation, the trio are planning finally to start exploring the country they have lived in for 15 years, though someone else will do the driving.

Despite the stress, they believe that Trump will not make much of a difference to their lives, even if the short-term hope of legalisation that was offered by Obama’s Dapa programme is gone.

They will just keep their heads down, keep their noses clean, and get on with it. Living where they do, they feel safe enough. In time, though, they hope that the outlook for them might become “a bit rosier”.

However, in time means eight years. When Alannah turns 21, she can apply to adjust the status of her parents, provided they entered the country legally when they first came to the US and provided they have a clean record.

Meanwhile, there is Kevin, a bar owner in New Jersey. He came to the US on a student visa working with the Hilton hotel group.

Hilton, he says, “messed up” his H1B visa application, which would have brought him a green card.

Because of his J1 status, he, unlike others, does have a social security number. He set up a business with some partners and has a good life here.

In 2011 he was picked up by immigration and customs enforcement, and detained for 13 days. He had been named by a former work colleague with a grievance.

With the help of the Irish Consulate General in New York and local political pressure, Kevin was allowed to stay on a year-by-year basis as long as he satisfied certain conditions.

More than anything, his time in detention was boring. However, it taught him that few white people, and even fewer Irish, get picked up by immigration officers in this way. Africans and Latinos are far more at risk.

Speaking before President Trump’s first executive order on immigration, Kevin was hopeful and willing to give Trump a chance.

“He will be good for business and his priority is, first, the wall, then illegals with a criminal conviction,” he said then. The “other stuff will all fall away”.

However, he is less certain now.

“I had a check-in with Homeland Security recently,” he says. “I had my lawyer with me, but the news was not good. I am shaken, to be honest. I think I could be gone this year. I might have to pack my bags in October.”

Kevin has paid taxes in the US for nearly 20 years. The Internal Revenue Service was always happy to take his money, but the new political reality created by the Trump whirlwind has seen a shift in bureaucratic attitudes.

“Some immigration people always want to take the hardest line. They were emboldened by the executive order, and the confusion it created, to act beyond their legal powers,” he says.

Today, the Irish undocumented look on anxiously ahead of Taoiseach Enda Kenny’s visit to the White House, hoping that an unpredictable meeting does not make their situation worse, even if short-term relief is unlikely, improbable or simply impossible for Kenny to deliver.

New York backed Hillary Clinton, so Trump owes few favours to the city of his birth.

However, there are many Irish-Americans who were a significant part of the Trump movement, and some of them are important players in the White House now.

Staten Island is the only New York borough that voted overwhelmingly for Trump.

Its congressman, Republican Daniel M Donovan, downplays fears that the Trump administration will change everything about American immigration policy.

“ I don’t think an interaction with any single world leader, whether positive or negative, would cause a departure from this policy, and certainly not one targeting immigrants of a particular nationality,” says Donovan, the lone Republican congressman in a Democratic city.

“This isn’t a radical shift from the Obama administration’s policies. In the last eight years, more than two million people have been deported from the United States.”