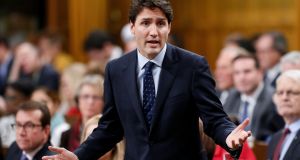 President Donald Trump will host Canadian Prime Minister Justin Trudeau on Monday, the White House said on Thursday, a meeting in which trade and a major crude oil pipeline are likely to be on the agenda.

The meeting will be the first for the two men since Trump won last November’s election.

“President Trump and prime minister Trudeau look forward to a constructive conversation on strengthening the relationship between our two nations,” the White House said in a statement.

Canada sends 75 per cent of its exports to the United States and is keen to avoid becoming the target of protectionist measures. Trump wants to renegotiate the trilateral Nafta trade pact with Canada and Mexico, which he says has been disastrous for American workers.

Last month, though, Trump cleared the way for TransCanada Corp’s proposed Keystone XL pipeline from the Alberta oil sands to US refineries. If built, the project could help a Canadian energy sector struggling with low crude prices.

Trudeau’s office said in a statement that the leaders looked forward to discussing the two nations’ “unique relationship”.