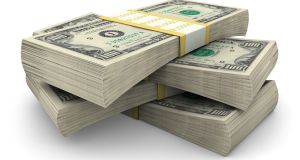 ‘It is one thing for Trump to call on US companies to invest at home, but it is much more significant if he gives them a real financial incentives to do so.’

From an Irish viewpoint, the tax debate in the US has taken a nasty turn. At their worst, the proposals now on the table could fundamentally change the world of foreign direct investment. On Planet Trump things change by the day, of course. But the plans now under discussion between the Trump administration and Congress are potentially toxic for Ireland.

Immediately after the election we expected lower taxes for US business and perhaps trade tensions with Mexico and China.

This carried dangers for Ireland, particularly if trade tensions spread. But there was a reasonable hope that the threat could be contained.

Now it looks increasingly likely that there will also be real financial incentives to persuade US companies to invest at home and penalise them for importing goods from abroad.

For Ireland and other countries trying to attract US investment the dangers are obvious.

It remains to be seen how this will pan out – and Trump’s statements on the detail have swung wildly. But this policy direction carries much greater dangers for Ireland.

It is one thing for Trump to call on US companies to invest at home, but it is much more significant if he gives them a real financial incentives to do so.

A key part of the Trump policy programme was a big cut in the tax rate which US companies pay on their profits – from 35 per cent to 15 per cent. But cutting corporate tax – and personal taxes, as Trump also promised – costs money.

And the big question was how Trump was going to get congressional agreement on a plan which – at least in theory – would sent the US budget deficit and debt levels soaring.

And this is where it has got messy. The Republicans in the Congress came forward with a plan last summer for a border adjustment tax. It sounds like a dull bit of bureaucracy.

But what it would do is cut the corporate tax bills of companies exporting from the US, and increase taxes on those who are importing to sell into the US market.

This has two attractions for the new president. First, it would provide a strong incentive for companies to make their products in the US.

Second, it would raise a significant amount of money – on one estimate up to $1,000 billion over the next decade. And so it could help to pay for tax cuts elsewhere.

Despite these advantages, Trump has flip-flopped on the issue. Economists and tax experts warn that it is complicated, messy and dangerous. It could send the US dollar soaring further – limiting the gains to exporters – or lead to other countries imposing tariffs on US exports.

And big retailers like Walmart, who import goods from overseas, are screaming loudly that it will increase their tax bills and push up prices for US consumers.

It is a formula which, if applied, would completely change the tax calculation for US companies.

In the past they had a clear incentive to expand overseas to serve markets outside the US as this could be structured to cut their tax bill With a border tax the opposite would apply.

For Ireland and other countries trying to attract US investment the dangers are obvious. US companies would still invest around the world to service local markets, access local talent and spread their activities.

But the boardroom bias would be to do this less, to make fewer investments overseas , and to try where possible to serve US and international markets from American bases.

So the Trump plan, and the negotiations between the president and Congress in the next six months, will be crucial for Ireland.

Political observers believe that if a deal is not shaped by autumn then it will not happen, with the mid-term elections in 2018 coming into view.

With this urgency in mind, Trump promised this week that he would unveil a “phenomenal” corporate tax announcement in the next two to three weeks. US stock markets surged as a result.

It is possible that the outcome will pull back from the rhetoric. Complexity and the likelihood that other countries might retaliate could kill off the border tax, already facing opposition from some senior Senate figures.

Some other way might be found to pay for corporation and personal tax cuts, which might be smaller in scale.

But whatever emerges it is clear that the new president is now planning to follow through on his promise to financially encourage companies to invest at home and penalise those who put money abroad.

Already this is having an impact. Intel this week made a big investment announcement for a plant in Oregon.

In the opaque world of big multinationals it is not clear whether this new plant was always destined for the US, but what happens when the big decision has to be made about a big investment?

Will Intel go to Ireland or Israel or stay in the US? For the next six months or so such decisions will be put on hold as everyone waits to see what happens.

When Trump first came in, talk of lower corporate tax rates and sabre-rattling on trade aimed at Mexico and China carried some risks for Ireland, but ones we could hope would not be too dangerous.

Since then the “America first” rhetoric, the aggressive tone with US business leaders and now talk of specific tax moves to encourage companies to invest in the US have upped the ante.

We await, with some trepidation, for news of the “phenomenal” tax package.