Nervous in Narva: a town caught between East and West

Estonia is determined to stay independent of Russia. As it trains its people as reserve fighters, Donald Trump and Vladimir Putin have brought new uncertainty

The border with Russia in the Estonian city of Narva could hardly be more symbolic. It is a half-frozen river running between two ancient castles that face one another down with their monumental stone walls.

This is a place that has been on the front line, on and off, for centuries. The city was almost entirely destroyed in the second World War. The bodies of people killed in the conflict, and rusty weapons, are still being found.

“War personally has been part of every human being in the territory, so in the soul we keep the memory of that,” Slava Govoruhin, a local 45-year-old welder, says. “We absolutely do not want this history repeated again.”

But on this cold winter morning it looks as if history is back. The Estonian Defence League has mounted a machine gun on the battlements of Hermann Castle, in a mirror image of events in the second World War, and is blasting off blanks towards Ivangorod Fortress.

It is part of an annual exercise called the Utria Assault, named for a victory against the Red Army the first time Estonia won independence. Participants trek for 36 hours towards the Russian border, all the while undergoing tests in improvised bombmaking, shooting and surviving the freezing winter.

The final challenge is to scale the castle wall, laden with weapons and ammunition. Many of the people taking part are volunteers who have ordinary jobs from Monday to Friday. It is part of a strategy to train as many as possible of Estonia’s population of 1.3 million people as reserve fighters, to make the country an unattractive conquest.

“It’s mainly to prepare if something happens,” Ruth Maadla, a 29-year-old waitress, says as she stands in fatigues with an AK-4 rifle slung around her. “You learn how to shoot, how to survive.”

Whether Russia would actually have any interest in coming over the border is far from certain. But the war in Georgia in 2008, Russia’s backing of separatists in Ukraine, and Russia’s involvement in Syria signalled to Estonia that Moscow was increasingly interested in flexing its muscle beyond its borders.

The year after Russia annexed Crimea, in 2014, the number of volunteers who signed up for the Estonian Defence League surged. There are now 25,000 of them around the country, their rifles oiled and ready.

“Every country needs to guarantee that they are able to protect themselves,” the Estonian president, Kersti Kaljulaid, says on a visit to the Utria Assault, to watch participants run through the forest while evading machine-gun fire. 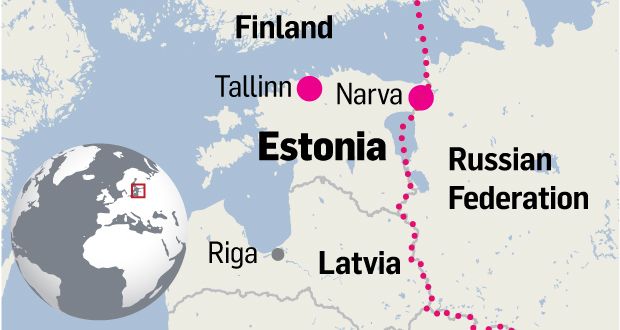 The inauguration of Donald Trump as president of the United States has brought a new uncertainty. His praise for Vladimir Putin, the Russian president, and scepticism towards Nato, which he has described as obsolete, caused alarm in Estonia and its fellow Baltic States, Latvia and Lithuania.

The region, bordered by sea and the Russian enclave of Kaliningrad, would be hard to defend, and local forces are hugely outnumbered.

“For us this is existential. Either you have Estonia on the map or you do not. It’s in our psyche. You cannot get it away. You can laugh about it, but this is the way it is with Russia,” Riina Kaljurand, a research fellow at the Tallinn-based International Centre for Defence and Security, says.

One final move by Barack Obama’s outgoing administration was to send 3,500 troops to Poland, and extra Nato troops are also expected to bolster the Baltic States. Estonia is on course to increase spending to 2.2 per cent of its gross domestic product, according to the defence ministry, and Latvia and Lithuania have agreed similar measures.

In Nato’s words it is responding to a “destabilising pattern of military activities and aggressive rhetoric” by Russia. Moscow, however, insists that Nato is responsible for increasing tensions, and describes military build-up on its borders as a threat.

These reflect two ways of seeing the world, and the two perspectives meet in Narva.

The river border is geographically neat, but in human terms it’s messy. The city built after the second World War was a hub of Soviet industry, and workers came from across the union to work in its factories. When the current border was drawn, in 1991, as Estonia reclaimed its independence and the Soviet Union collapsed, Narva remained a place where the dominant language is Russian. The factories now mostly stand empty.

Fewer than half of Narva’s residents have Estonian citizenship today. The rest are largely either Russian or have “grey passports” – people who didn’t fall easily into one category or another when the new state was formed. Russian television plays in the bars and cafes. It is not difficult to find admirers of Putin.

“Putin, he has been protecting Russians worldwide, and that’s why we feel empathy for him and his politics,” Stanislav Maksimov, an unemployed 38-year-old father of three, says. “He made very smart moves, and that’s why we strongly love and respect him as a strong leader.”

Estonia’s Russians, who make up a quarter of the population, have not always felt welcome in the new state. Differences over the interpretation of history – are Soviet forces in the second World War heroes who defeated the Nazis, or are they invaders? – has caused unrest in the past.

In 2007 the decision to move a Soviet war memorial revered by Russians and considered a symbol of occupation by Estonians caused deadly rioting, accompanied by a wave of cyberattacks.

Tallinn considers this to be an early example of what it calls Russia’s hybrid threat: a mix of propaganda, political interference and cyberoperations such as those seen in the US presidential election, which intelligence agencies have blamed on Russia.

Narvans say that all they want is peace and jobs. They tend to agree with Moscow that Nato was responsible for upping the ante, and they look askance at the Estonian Defence League running exercises in the middle of town.

I am not happy when some politician in Washington starts saying he will send tanks to Russia. We will have to face the music, not them

“It only causes something small, something accidental, to cause a big boom,” Vyacheslav Konovalov, the city’s vice-mayor, says.

His family history tells the story of the city: his mother came from a Russian village to work in the textile industry; his father was a local Estonian-speaker with a Russian name. His family still straddles the border.

“I am not happy when some politician in Washington starts saying he will send tanks to Russia. We will have to face the music, not them,” he says.

Konovalov’s most pressing concern is that sanctions be lifted. They hit Narva’s already struggling economy by damaging trade with its closest urban hub: St Petersburg and its five million inhabitants, 160km away.

Yet the citizens of Narva know that the course of world events is out of their hands, according to Kristina Kallas, the acting director of Narva College, a branch of the University of Tartu in the centre of town. “It makes you nervous,” she says. “In Narva they always say we are in a chess game that the big powers are playing, and we are one piece they are moving around.”

Government to announce review of freedom of information legislation

3 Two teenagers died after separate incidents in Dublin and Waterford