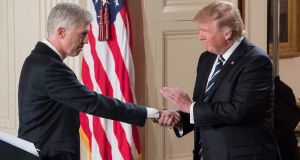 US president Donald Trump shakes hands with Neil Gorsuch, his nominee for the supreme court. A Bar of Ireland members has said that Mr Trump’s personal attacks on judges have no place in a democracy based on the rule of law. Photograph: Michael Reynolds/EPA.

US president Donald Trump’s personal attacks on judges have no place in a democracy based on the rule of law, the chairman of the Bar of Ireland’s human rights committee has said.

Mr Trump’s comments are part of a sinister trend which should be condemned, Conor Dignam SC said on Friday.

“President Trump’s threatening tweets directed at judges, appointed by his predecessors with the approval of the US Senate, as they implement the rule of law, is an attack on democracy and another extremely concerning development in the regard and attitude towards the important role played by judges and the legal profession in protecting the rule of law,” he said in a statement.

The unique role played by the judiciary as part of the system of checks and balances in a democracy was designed to act as the bulwark against the potential abuse of power by either or both of the other branches of government and to protect the human, civil and constitutional rights of individuals against unlawful acts of the executive and legislative branches, he said. An attack on that role was a threat to individual human rights.

“This worrying trend of undermining the rule of law began last year when the UK tabloid media tarnished judges as ‘enemies of the people’ for their ruling on Article 50 [which triggers the UK’s EU departure]. Now we have an executive head of state attacking judges who are required to act independently without fear or favour because he disagrees with their interpretation of the law.”

Mr Dignam said US judges are sworn to “faithfully and impartially discharge and perform all the duties incumbent under the Constitution . . .”.

The US judges involved have performed their constitutional function and their decision is based on an independent, impartial interpretation of US law, Mr Dignam said.

An executive order issued by Mr Trump and affecting immigration and refugee policy has been stayed by the US courts, a decision that has been criticised by Mr Trump.

There are serious concerns about the compliance of Mr Trump’s executive order with international human rights norms, preventing, as it does, individuals from applying to the US for asylum, Mr Dignam said.

There were obviously arguments about the constitutionality of the travel ban under American law because four separate judges have held that a stay was justified pending further argument. Yet still Mr Trump continued to throw mud at the judiciary, Mr Dignam said.

“Surely it is in the interests of all American citizens – and the world – that America remains a democracy?” he concluded.