America Letter: For big football day, Americans let down their guard – for a little while 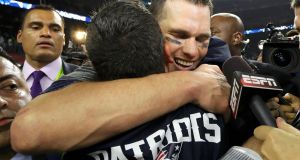 Maybe it was because the commander in chief had left town for the weekend to escape to his luxury Florida retreat, or maybe just the unseasonably balmy weather. But there was an air of hope and endless possibility about the streets of Washington last weekend.

The first Sunday of February means one thing to most Americans: Super Bowl Sunday.

From late morning, the trendy Eastern Market area east of Capitol Hill was packed with families and friends brunching and stocking up on guacamole, dips and other culinary supplies for the traditional family meal in front of the TV.

Cable channels began streaming Super Bowl coverage from mid-afternoon, hours before kick-off, as the networks prepared to cash in on the biggest advertising event of the year. Fox, broadcasting this year’s game, made sure to schedule its much-anticipated interview between host Bill O’Reilly and president Donald Trump at 4pm, just before kick-off.

The glamour and thrill of the pre-match build-up in Houston radiated through screens across the country. For a brief moment politics was forgotten, and this broken, deeply divided country seemed united in a warm feeling of shared national identity.

For many, the Super Bowl is about much more than the football. The famed half-time show has become an institution in itself, while the coveted advertising slots generate the most highly anticipated ad campaigns of the year.

Ahead of the game, there was feverish speculation about whether politics would infringe on the event. Would Lady Gaga, the bolshy, outspoken, ferociously talented feminist from New York, take a swipe at the new president during her half-time show? What about the cast of Broadway hit Hamilton, who famously delivered a message from the stage to incoming vice-president Mike Pence, who was sitting in the audience, last November?

In the end, both acts chose restraint over rebuke. Lady Gaga limited her political message to a call for unity, closing her introduction with an emotional line from the pledge of allegiance: “One nation under God, indivisible with liberty and justice for all”, The three actors who played the Schuyler Sisters in the original version of Hamilton simply chose to add the word “sisterhood” to their soulful rendition of America the Beautiful.

The commercials that punctuated the marathon coverage were less equivocal in their political messaging. Though cloaked in subtlety, ad after ad tackled the issue most dividing America at the moment – immigration. Iconic US brands such as Budweiser and Coca-Cola played with the tensions and issues underpinning this moment in American history.

Budweiser’s ad relayed the journey of one of the brand’s forefathers, Adolphus Busch, as he arrived in the US from Germany in the 19th century, only to be welcomed by shouts of “you’re not welcome here”. The ad immediately sparked a #boycottbudweiser backlash from Trump supporters.

Coca-Cola revived an ad depicting people of different backgrounds and ethnicities singing America the Beautiful in various languages, a powerful message of diversity and inclusion.

Construction company 84 Lumber was forced to alter its ad before it even made it to air, removing a scene showing a Latino mother and daughter facing a wall as they tried to move north. In the end, the construction company directed viewers to the full version of the ad online.

Football to the fore

Then, just as the on-air commentary and Twitter chatter threatened to spill over to the world of politics, the football took hold and the eyes of the nation were brought back from the brink of political controversy to the action on the pitch.

By the second quarter of this Super Bowl final, the impossible seemed to be unfolding, as the New England Patriots began to lose ground. By the third quarter they trailed 28-3 to the Atlanta Falcons. The political metaphors quickly took hold. Was this another case of an improbable victory for the underdog? Had the polls got it wrong? Was this a case of sport imitating life?

But with 30 minutes to go, one of the greatest comebacks in Super Bowl history emerged, as the Patriots powered ahead to edge their rivals 34-28. Quarterback Tom Brady lifted the Vince Lombardi trophy to rapturous applause. Order was restored, the expected had happened, and the Patriots had won their fifth Super Bowl title.

As Patriot supporters breathed a sigh of relief and the sun went down on another Super Bowl Sunday, millions of fans went to sleep basking in the glow of another thrilling football final.

On Monday, it was back to reality. President Trump flew back to Washington and the tweets recommenced.

After a day of togetherness and camaraderie, the idea of national unity once again seemed elusive.