In audio recorded shortly after a federal appeals court refused to reinstate a temporary travel ban, US president Donald Trump has told reporters he 'looks forward' to pursuing the case in the US Supreme Court. Video: Reuters 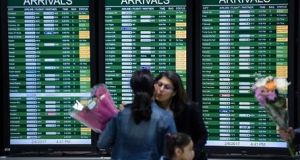 Flowers are presented upon a traveller’s arrival in the US. A review of Irish pre-clearance arrangements, which allow travellers to clear immigration before landing in the US, is under way. File photograph: Getty Images

A meeting between Irish and US officials about pre-clearance operations at Dublin and Shannon Airports has been brought forward following concerns over US president Donald Trump’s executive order restricting immigration.

The Preclearance Consultative Group (PCG) was due to meet on March 1st, but Minister for Transport Shane Ross said that “in light of recent events” the meeting will take place earlier, on February 23rd.

The PCG is made up of representatives from the US Department of Homeland Security, Customs and Border Protection and the Transportation Security Administration, and from the Irish Department of Transport, and Dublin and Shannon Airports.

A review of pre-clearance arrangements, which allow travellers to clear immigration before landing in the US, is also under way.

The Department of Transport said this was almost complete but could not confirm a date for its conclusion.

The review follows the indefinite barring of Syrian refugees and a block on citizens of seven Muslim-majority countries - Iran, Iraq, Libya, Somalia, Sudan, Syria and Yemen - for 90 days. The order is currently subject to legal appeal and has been stayed.

“My officials have already been in contact with the US authorities and have conveyed our concerns about President Trump’s executive order and its implications for US pre-clearance services at Shannon and Dublin Airports,” the Minister said.

Mr Ross said the Ireland-US Pre-clearance Agreement may be terminated by either party, with one year’s written notice. There is no provision for a suspension. The Government has already signalled its intention to retain pre-clearance facilities.

It remains unknown how many travellers from Irish airports have been prevented entry to the US during the brief operation of Mr Trump’s executive order.

Responding to a request for such information from Independent TD Tommy Broughan, Minister for Justice Frances Fitzgerald said specific details on US immigration decisions were not available.

Mr Broughan welcomed the decision to bring the PCG meeting forward and said he awaited details of its outcome.

The Department of Transport would not comment on the forthcoming PCG meeting other than to say it will examine “any implications” of the executive order.