Kenny and Fitzgerald ‘not told’ of false Tusla file on McCabe 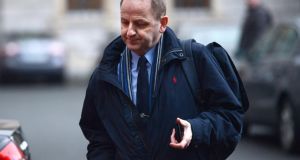 Sgt Maurice McCabe is to sue Tusla over the agency’s file on him. Photograph: Cyril Byrne/The Irish Times 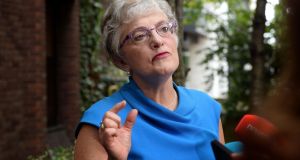 The Taoiseach and Tánaiste have denied they were aware of the existence of a Tusla file containing false child sex abuse allegations made against Sgt Maurice McCabe.

Enda Kenny and Frances Fitzgerald denied that Minister for Children Katherine Zappone had briefed them on the litany of errors in the handling of allegations about the garda whistleblower by Tusla, the Child and Family Agency.

Ms Zappone insisted she informed the “relevant” Government colleagues about the Tusla file containing the claims.

However, in a statement on Friday night a spokesman for Ms Zappone said it would have been “highly inappropriate for the Minister to brief the Cabinet on confidential, highly sensitive and personal information which one could reasonably assume was the subject of a protected disclosure, which was leading to the establishment of the commission”.

Ms Fitzgerald and Mr Kenny said they knew the McCabe family had met Ms Zappone two weeks ago but both insisted they did not know the content of the allegations or about the details of the Tusla records.

The treatment of Sgt McCabe by Garda management will be investigated by a newly established commission of investigation, headed by Mr Justice Peter Charleton. It will look into claims that senior gardaí, including Garda Commissioner Nóirín O’Sullivan, orchestrated a smear campaign against Sgt McCabe in an attempt to discredit him. Ms O’Sullivan has repeatedly rejected claims she was involved in an attempt to damage Sgt McCabe’s reputation.

Ms Zappone’s spokesman said earlier on Friday that she met Sgt McCabe and his wife Lorraine on January 25th after receiving a letter from Tusla confirming it had wrongly sent a file on the claims against him to gardaí.

The spokesman said it was always Ms Zappone’s intention that Tusla would be included in the newly established commission of investigation into the handling of whistleblowers.

Her spokesman said: “Minister Zappone informed relevant Government colleagues during the course of this period . . . Minister Zappone was always of the view that Tusla would form part of the investigation by the commission of inquiry.”

Ms Fitzgerald on Friday said: “The terms of reference of the proposed commission put before the Oireachtas by me refer specifically to a complaint of criminal misconduct against Sgt McCabe and whether this allegation was used against him.

The Taoiseach’s spokesman said Mr Kenny was aware of the meeting between Sgt McCabe and Ms Zappone but not the nature of the allegations made against the whistleblower.

Ms Zappone’s spokesman declined to say who the Minister had informed about the Tusla file on Sgt McCabe but sources said Ms Zappone did not inform Cabinet of the Tusla revelations when the proposed terms of reference for the commission were discussed this week.

Freedom of Information documents released to Sgt McCabe showed Tusla received a complaint from a counsellor about him in August 2013 and passed the claims to gardaí.

The false allegations were widely circulated to senior members of the force. No contact was made with Sgt McCabe about the matter and he was never questioned in connection with the claims.

In May 2014, Tusla admitted the file should not have been created and was a clerical error on their part.

In a statement on Friday, Tusla admitted “mistakes have been made” and the agency was in the process of issuing an apology. “On this basis, we have commenced an internal review and will co-operate fully with any commission of inquiry if requested.”

It has since emerged a formal apology issued by the agency was sent to the wrong address and was instead given to Mr McCabe’s neighbours.

A solicitor for Sgt McCabe has confirmed he plans to sue the State for the damage done to him and his family and will take legal action against Tusla. The solicitor said the McCabes were devastated about the revelations.

The solicitor explained the counsellor who had investigated the complaint against Sgt McCabe worked for an agency and was not a direct employee of either Tusla or the HSE.

The documents released to Mr McCabe show a complaint of child sex abuse was made against him in 2006 by the daughter of a Garda colleague. Sgt McCabe had disciplined the colleague weeks beforehand. The complaint was investigated and the Director of Public Prosecutions ruled there was no case.

In 2013, the allegation resurfaced with further strands to it. Tusla admitted in 2014 that this was a clerical error on its part and a social worker had wrongly included the claims in Mr McCabe’s file. It contacted gardaí to ensure this was clarified. At no point was Sgt McCabe contacted about the complaint and he was not informed when it was found to be an error in 2014.

Tusla sought to correct its files, but in late 2015, one of its investigating officers wrote to Sgt McCabe repeating the allegation and requesting an interview. This was the first he knew of the allegations.

Five months later, Tusla confirmed to Sgt McCabe that there was in fact no such allegation against him.

The allegations place further pressure on Ms O’Sullivan to outline why she did not make Sgt McCabe aware of the claims or inform him when the file was found to be an error.