Celebrities Amy Schumer and Emily Ratajkowski among more than 300 arrested 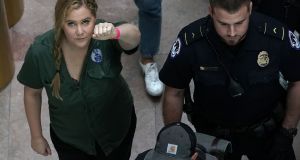 Comedian Amy Schumer (left) is led away after she was arrested during a protest against the confirmation of Supreme Court nominee Judge Brett Kavanaugh. Photograph: Getty 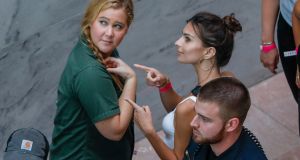 Amy Schumer (left)) and US actress Emily Ratajkowski (right) gesture after getting detained along with hundreds of other protestors. Photograph: EPA 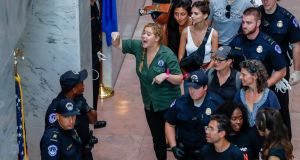 US comedian Amy Schumer gestures after getting detained along with hundreds of other protestors. Photograph: EPA

More than 300 protesters, including the comedian Amy Schumer, have been arrested at the US Capitol in Washington as they made a final, desperate appeal to senators to reject the embattled supreme court nominee Brett Kavanaugh.

Demonstrators chanted, unfurled banners and staged a sit-in at a Senate office building, one day before the body was poised to take its first vote on the judge’s nomination to America’s highest bench.

A crucial Senate ballot on his confirmation was expected on Friday before a final vote on Saturday. His chances were boosted on Thursday when two key Republican Senators whose support is vital, Jeff Flake and Susan Collins, said they were satisfied by an FBI investigation into sexual assault allegations.

Mr Kavanaugh, who has also faced criticism over a furious Senate appearance last week in which he claimed the allegations were “revenge on behalf of the Clintons”, made a further pitch to wavering Senators with an article in the Wall Street Journal on Friday conceding he “might have been too emotional”.

The scenes in Washington on Thursday were unprecedented for any supreme court nominee in recent history.

Thousands of protesters, including survivors of sexual assault, gathered outside the courthouse in the US capital where Mr Kavanaugh sits as a federal judge and walked in unison to the supreme court, where he hopes to secure a lifetime appointment.

They marched to a rallying cry: “We believe Dr Christine Blasey Ford”, the university professor who has accused Mr Kavanaugh of drunkenly and violently sexually assaulting her at a party when they were teenagers.

Time for women to be heard

“It’s time for women to be heard,” said Karen Bralove, an alumna of Holton-Arms, the all-girls preparatory school Ms Blasey Ford attended in the early 1980s when she alleges Mr Kavanaugh assaulted her.

“I don’t know whether Brett is going to be confirmed, but women and survivors are not going to be quiet anymore.”

As protesters brandished signs that read “Never again” outside the steps of the supreme court, senators huddled behind closed doors in the Capitol on the other side of the street to digest the findings of an FBI investigation into the allegations.

Events on Capitol Hill moved swiftly as an array of politicians, activists and sexual assault survivors by turns grabbed a megaphone from a makeshift podium outside the supreme court.

The crowd roared at the news that Sen Heidi Heitkamp, a Democrat facing a re-election battle in conservative North Dakota, had announced her opposition to Mr Kavanaugh. Another Democrat, Joe Manchin of West Virginia, remained undecided on Thursday afternoon.

By late afternoon demonstrators marched directly to the scene of the debate. Thousands packed the atrium of the Hart Senate office building, while streams of protesters flooded each floor with chants of “Our court” and “Justice now”. Many spread out banners and sat on the floor, then were put in plastic handcuffs by law enforcement and led away.

Police said 302 people were arrested. Among them was Schumer, who is involved with the Time’s Up movement against sexual violence and harassment and is a distant relative of the Senate minority leader, Chuck Schumer, and the model Emily Ratajkowski.

“Today I was arrested protesting the Supreme Court nomination of Brett Kavanaugh,” Ratajkowski wrote on Twitter.

Although Mr Kavanaugh’s nomination was met with protests from the outset - with activists repeatedly interrupting his confirmation hearing in early September - the scenes have escalated and grown more impassioned following the allegations of sexual misconduct.

Angela Trzepkowski, a homemaker who drove from Delaware to join the protests, said: “You can’t stay at home with something like this going on. Women are feeling empowered and stronger, and it’s no longer going to be the good ol’ white boys’ club. It can’t be any more.”

Emotions were heightened after Ms Blasey Ford recounted in detail what she claims was an assault by Mr Kavanaugh’s in testimony before the Senate judiciary committee last week.

Appearing after Ms Blasey Ford, Mr Kavanaugh vehemently denied the charges in a speech that was striking for its overtly partisan tone.

Ms Bralove added: “This is so triggering for so many people.” She added the fight would not end even if Kavanaugh is confirmed. “We do not do 10 days of marching and then go back to our lives, because nothing is the same any more. Nothing.” - Guardian