US Politics: How does a nation define itself when what made it distinct has become commonplace? 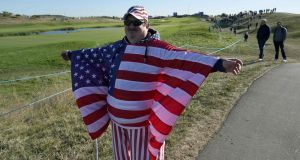 A spectator wears clothing in the colours of the US flag during a practice session ahead of the 42nd Ryder Cup at Le Golf National Course south-west of Paris on September 26th. Photograph: Lionel Bonaventure/AFP/Getty Images

The nondescript hall, the accented oaths, the rivulets of tears across cheeks of all colours: citizenship ceremonies differ little. You can see this routine enlargement of a nation in Washington, Albuqurque, Dearborn and San Diego.

You can also see it, however, in Dublin, Malmo, Hamburg and Perth. The British and French would question whether citizenship as a matter of personal commitment, rather than blood, was ever unique to the US. But even if it was, much of the world has caught on.

The spread of this and other Enlightenment ideas is stirring, but also awkward for a nation that distinguished itself by them. From the start, what united America’s otherwise diverse people was the sense of being engaged in an experiment: in civic rather than ethnic nationhood, but also in meritocracy over aristocracy, and in religious tolerance over its opposite. Through these ideals Americans defined themselves against the Old World.

This point of contrast remained a viable basis for national togetherness well into the 20th century. In increments, it has weakened, less through the US’s own failures than progress elsewhere.

The first World War immolated some of the autocracies in opposition to which the US found its identity. From the cinders of the second World War rose the modern, rational European state. After empire came post-colonial migration. And after 1989 came, if not an absolute win for democratic capitalism as the terminal point of human affairs, then its territorial spread.

Lots of theories circulate about the present fraying of the US republic – about the rancour that fouls Washington, but also sport, entertainment and other former havens from politics.

Conservatives blame too much immigration in too short a time. Others cite the absence of an external threat to rank with the Soviet Union. The modish explanation majors on the emergence of social media. All of these are plausible, but also a bit fiddly. A problem so large might have a cause that is just as epic.

What if the source of division is not the failure of American ideals but their normalisation across a broader territory? How does a nation define itself when what made it distinct has become commonplace to the point of banality? What do Americans share with each other that many other people do not?

The trouble is the US’s reliance on the unusualness of these characteristics for its sense of self. The rest can fall back on other things: long histories, say, or preponderant ethnic majorities. America has just its values and institutions. This “credal” nationalism is less effective when the creed in question is so widespread.

Birthright citizenship remains rare outside the US, or at least the western hemisphere. Other than that, it is hard to think of founding American ideals that have not rolled out elsewhere. “In no other country on earth,” said Barack Obama, as a mere senator, “is my story even possible.” Yes, it is.

None of this is to tease the US for being – as Johnny Rotten sang of his UK – just another country. Nor is there shame in a nation holding itself together with the trusty adhesive of myth. Mine believes that universal healthcare, like decent tailoring, stops at the water’s edge. Others teach their young selective accounts of the past. America’s belief in the uniqueness of its values is on the benign end of these fictions.

With the heinous exception of slavery and Jim Crow, it is also true that the US was more enlightened (or Enlightened) than lots of countries in lots of ways for a long time, even within the west. “White Australia” policies did not die until the 1970s. Germany did not open up its naturalisation laws until the millennium. But such pre-modern rigidities have declined, leaving Americans to wonder, if subconsciously, what makes them American.

From time to time, a well-meaning British politician will propose that such a diverse nation as the UK must celebrate its shared values. Someone will ask what these are. Momentarily stumped, the politician will venture rule of law and democracy. The interlocutor will suggest that these things are not unheard of in other places. At that point, there is mumbled agreement that we are no good at abstractions, and the subject is dropped for a few years.

In a sense, the US is beset with the same conundrum. The difference, as we are seeing, is the awesomeness of the stakes. – Copyright The Financial Times Limited 2018