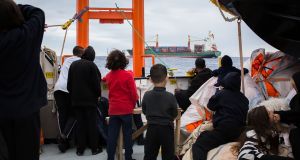 One in five migrants died or disappeared trying to cross the Mediterranean Sea from Libya in September, the highest proportion of deaths recorded on the crossing, according to new figures.

The figures draw attention to the plight of refugees and migrants in Libya, coming after a month of heavy fighting in Tripoli affected thousands locked up in detention centres.

Just over a week ago the last private rescue ship operating in the central Mediterranean, the Aquarius, had its registration revoked, putting its future operations at risk.

In a statement Médecins Sans Frontières, one of two NGOs that operates the vessel, said “this decision condemns hundreds of men, women, and children to death”. The Italian government denied putting pressure on the Panama Maritime Authority to deflag the vessel.

The latest figures were collected by the Italian Institute for International Political Studies, which is awaiting confirmation by official sources and documents. Its research showed seven out of 10 migrants and refugees are intercepted and brought back to Libya by the EU-backed Libyan coastguard, while only one in 10 makes it to Europe.

Tens of thousands of people have been returned to Libya since February 2017, after Italy struck a deal to fund the Libyan coastguard amid growing political pressure to stop migration. Migrants returned to Libya are locked in detention centres, where many are exploited, physically abused or forced to labour, according to human rights groups and aid organisations.

“The Mediterranean is closed,” one Eritrean man told The Irish Times recently, though he added that detainees in Libya are still so desperate to find any form of escape they are trying to raise more money to pay smugglers.

“We are losing hope. Things are becoming worse and worse. We think God has left us,” he wrote in a WhatsApp message from Abu Salim detention centre in southeast Tripoli.

Many of the refugees who tried to cross the Mediterranean Sea in September would have been fleeing violence. Since August 26th, rival militias have been attempting to take control of Libya’s capital. Refugees appealed for evacuation as they were abandoned, left for days without food or water, repeatedly threatened or released to fend for themselves, after several detention centres ended up on the front lines.

Two detainees told The Irish Times that an Eritrean man in his 20s died on Tuesday, due to sickness exacerbated by the conditions he was being held in and a lack of medical attention.

Though a ceasefire was declared last week, aid workers are unsure about whether it will last: a previous accord, signed on September 4th, held for just a few days.

“Reinforcing search-and-rescue capacity on the central Mediterranean and disembarkation in places of safety, has to be everyone’s goal,” United Nations high commissioner for refugees Filippo Grandi said on Sunday. “We are talking about people’s lives. Refugees and migrants cannot be continually put at risk while States argue over their responsibilities.”

So far this year, there have been at least 10 incidents where 50 or more people died in the central Mediterranean, according to the UN refugee agency, the UNHCR. A petition calling for the Aquarius to be allowed resume Mediterranean rescues has received more than 160,000 signatures.