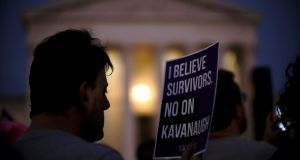 Activists gather outside the US supreme court to hold a vigil in opposition to nominee Brett Kavanaugh in Washington, US. Photograph: James Lawler Duggan/Reuters

The FBI’s report on sexual misconduct allegations against US supreme court nominee Brett Kavanaugh neared completion late on Wednesday as the battle over his selection by US president Donald Trump approached a new turning point.

The US Senate was expected to receive the report by early on Thursday two sources familiar with the matter said. Senators were to be granted access to review it during the day on Thursday.

While the report’s conclusions were as yet unknown, there was already a partisan battle over it as Mr Trump and the Senate Republican leadership battled to corral enough support for a majority vote for Mr Kavanaugh in the days ahead.

Democrats were in near unanimity against Mr Kavanaugh, a conservative federal appeals court judge.

US Senate Majority Leader Mitch McConnell set up a procedural vote for as early as Friday on the Kavanaugh nomination.

Mr McConnell, a Republican, filed a petition for a so-called cloture vote, which if successful would limit debate on the Mr Kavanaugh nomination and start the clock ticking on a final 30-hour waiting period before the Senate could vote to confirm the nominee.

After filing a cloture petition, lawmakers must wait one legislative day before proceeding to the cloture vote, according to Senate rules. That means a cloture vote could come on Friday morning at the soonest.

“It’s time to put this sickening display behind us,” Mr McConnell said in remarks on the Senate floor earlier in the day. “The Senate will vote on this nomination this week.”

Several people with information related to allegations against Mr Kavanaugh told Reuters they had not heard from the FBI, suggesting its report may be narrower than was desired by some of the lawmakers who demanded it just days ago.

Christine Blasey Ford, a college professor from California who accused Mr Kavanaugh of assaulting her in 1982 when they were high school students, has not been contacted by the FBI, her attorneys said.

As Senate Republican leaders marched toward a final vote on Mr Kavanaugh’s nomination, perhaps over the weekend, the three Republicans who could be key to whether Mr Kavanaugh is confirmed – Senators Jeff Flake, Susan Collins and Lisa Murkowski – criticised Mr Trump for his remarks about Ford at a political rally in Mississippi on Tuesday.

Dr Blasey Ford, who testified last week at an extraordinary Senate Judiciary Committee hearing, said she could not remember the precise date or location of the alleged assault or how she got home later, but offered a detailed account of the incident.

She said a drunken Mr Kavanaugh pinned her down, tried to remove her clothing and covered her mouth when she screamed.

Imitating Dr Blasey Ford’s testimony, Trump, who was himself accused during the 2016 presidential race of sexual misconduct with numerous women, said: “What neighborhood was it in? I don’t know. Where’s the house? I don’t know. Upstairs, downstairs, where was it? I don’t know. But I had one beer. That’s the only thing I remember.”

“And a man's life is in tatters,” Trump added.

Mr Flake told NBC’s Today show that “there’s no time and no place for remarks like that, that discuss something this sensitive at a political rally . . . It’s kind of appalling.”

Ms Collins told reporters: “The president’s comments were just plain wrong.” She did not respond when asked if his comments would affect her vote on Mr Kavanaugh’s confirmation.

Asked whether Mr Trump’s comments would affect her vote, Ms Murkowski told reporters: “I am taking everything into account. The president’s comments yesterday mocking Dr Ford were wholly inappropriate and, in my view, unacceptable.”

A day after the hearing, Mr Trump had called Ford “a very credible witness” who provided “very compelling” testimony.

Mr Kavanaugh has denied Ford’s accusation as well as allegations by two other women, all dating from the 1980s, while accusing Democrats of a political “hit.”

Mr Flake was instrumental last Friday in getting Mr Trump to order an FBI investigation into the allegations against Kavanaugh, nominated by Mr Trump for a lifetime job on the top US court.

Mr Trump limited the investigation to no more than a week.

Senator Dick Durbin, the No 2 Senate Democrat, complained in an interview with Reuters that the White House had not responded to requests for documents detailing its instructions to the FBI about the scope of its investigation of Mr Kavanaugh.

“There’s clearly a reason for that and I assume the administration doesn’t want members of Congress and the public to see it,” Mr Durbin said.

It was not immediately clear whether the FBI report, which will be made available to senators, would be released to the public.

Mr Trump’s fellow Republicans control the Senate by a 51-49 margin. If all the Democrats oppose Kavanaugh, Mr Trump cannot afford to lose the support of more than one Republican for his nominee, with US vice president Mike Pence casting a tiebreaking vote. No Republicans have said they will vote against Kavanaugh.

In the latest seven-day average in a survey of 4,057 U.S. adults, 41 per cent of respondents opposed Mr Kavanaugh, 33 per cent supported him and 26 per cent said they did not know. Opposition to Mr Kavanaugh grew four percentage points after the hearing, apparently driven by people who previously were undecided.

In a Twitter post on Wednesday, Mr Trump did not back away from his rally comments, instead attacking Mr Kavanaugh’s Democratic critics. Mr Trump said when he goes to political rallies, which are organised by Republicans, he sees that voters are angry at the “vicious and despicable” way Democrats are treating his nominee.

At a White House briefing, Mr Trump’s spokeswoman Sarah Sanders defended his remarks in Mississippi and said he was not concerned the comments may have jeopardised the votes of key senators.

“The president was stating the facts” about the gaps in Dr Blasey Ford’s recollection of the alleged incident, Ms Sanders said. – Reuters