Brett Kavanaugh moves a step closer to US supreme court

As Republicans move to schedule a final vote on US supreme court nominee Brett Kavanaugh for the end of the week, thousands of women including actresses Amy Schumer and Emily Ratajkowski demonstrated outside the Supreme Court on Thursday (October 4). 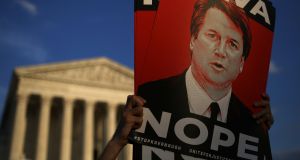 Brett Kavanaugh moved a step closer to becoming a supreme court justice yesterday after two key Republicans indicated they may support his nomination.

Republican senators Jeff Flake and Susan Collins hinted that they were satisfied to proceed with a vote on Mr Kavanaugh’s nomination having reviewed the results of an FBI investigation, though they did not confirm how they would vote.

The Senate is due to hold a procedural vote on Friday on the nomination, paving the way for a full vote on Saturday morning.

As thousands of protesters demonstrated inside and outside the senate buildings in Washington DC, there was increasing confidence among Republicans that Mr Kavanaugh would be endorsed, though it remained uncertain how Lisa Murkowski, a senator from Alaska, would vote.

With Republicans holding just 51 seats in the 100-seat chamber, the Republican leadership needs full support from its members though it is possible that some Democrats could vote in favour of Mr Kavanaugh.

Hundreds of protestors who were demonstrating inside the Senate building were arrested on Thursday. Many were chanting: “We want justice now” and holding signs in support of Christine Blasey Ford, the woman who testified under oath last week that Mr Kavanaugh assaulted her when he was 17.

Among them was Schumer, who is involved with the Time’s Up movement against sexual violence and harassment and is a distant relative of the Senate minority leader Chuck Schumer, and the model Emily Ratajkowski.

“Today I was arrested protesting the Supreme Court nomination of Brett Kavanaugh, a man who has been accused by multiple women of sexual assault,” Ratajkowski wrote on Twitter. “Men who hurt women can no longer be placed in positions of power.”

Wow, such enthusiasm and energy for Judge Brett Kavanaugh. Look at the Energy, look at the Polls. Something very big is happening. He is a fine man and great intellect. The country is with him all the way!

The harsh and unfair treatment of Judge Brett Kavanaugh is having an incredible upward impact on voters. The PEOPLE get it far better than the politicians. Most importantly, this great life cannot be ruined by mean & despicable Democrats and totally uncorroborated allegations!

A vicious, vile and soulless attack on Dr. Christine Blasey Ford. Is it any wonder that she was terrified to come forward, and that other sexual assault survivors are as well? She is a remarkable profile in courage. He is a profile in cowardice. https://t.co/UJ0bGxV1EZ

Senators spent much of the day poring over the confidential FBI report into Mr Kavanaugh in a secure room in the Capitol building. The White House sent the report to the Senate Judiciary Committee in the early hours of Thursday morning.

But Republicans and Democrats gave conflicting accounts of the content of the report and its implications for Mr Kavanaugh’s nomination.

Senate majority leader Mitch Mc Connell said the FBI report “did not corroborate” any of the accusations of sexual misconduct that have been alleged against Mr Kavanaugh.

This sentiment was echoed by Senate Judiciary chairman Chuck Grassley, who said there was “no hint of misconduct”.

“There’s nothing in it that we didn’t already know,” he said. “It’s time to vote.”

But Democrats criticised the scope of the FBI investigation which was ordered last Friday by the White House at the behest of Republicans senator Jeff Flake who said his support for Mr Kavanaugh was conditional on an investigation taking place.

“We had many fears that this was a very limited process that would constrain the FBI from getting all of the facts,” Senate minority leader Chuck Schumer said. “Those fears have been realised.”

The White House expressed confidence that Mr Kavanaugh would be endorsed.

“This is the last addition to the most comprehensive review of a Supreme Court nominee in history, which includes extensive hearings, multiple committee interviews, over 1,200 questions for the record and over a half million pages of documents,” deputy press secretary Ray Shah said as he confirmed receipt of the FBI report.

The US president took to twitter to back his nominee.

“Wow, such enthusiasm and energy for Judge Brett Kavanaugh. Look at the Energy, look at the Polls. Something very big is happening. He is a fine man and great intellect. The country is with him all the way!”

He said the “harsh and unfair” treatment of Judge Kavanaugh was having “an incredible upward impact on voters”.

“The PEOPLE get it far better than the politicians. Most importantly, this great life cannot be ruined by mean & despicable Democrats and totally uncorroborated allegations!”