Trump lauds benefits of trade pact with Canada and Mexico 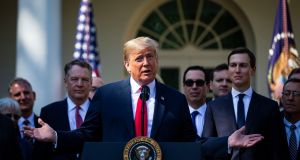 Donald Trump: “We are not going to allow our steel industry to disappear.” Photograph: Al Drago/The New York Times

US president Donald Trump has hailed a trade deal between Canada, Mexico and the US that will send cash and jobs “pouring into the United States and north America”.

Mr Trump eulogised the agreement which was arrived at late on Sunday night as “the most important trade deal we’ve ever made by far”.

But almost immediately questions were raised about whether the proposal would be passed in Congress. The Democrats are hopeful of winning control of the House of Representatives in November elections and are unlikely to endorse it.

The trilateral trade pact will be known as the US Mexico Canada Agreement (USMCA). It will replace the North American Free Trade Agreement (Nafta), which was implemented under the Clinton administration 25 years ago.

Negotiators reached a deal on the outstanding points late on Sunday after Canada agreed at the 11th hour to sign up to the pact.

US negotiators were due to send the draft text to Congress on Monday and markets rallied on the back of the announcement. The Canadian dollar and the Mexican peso also strengthened against the US dollar.

Mr Trump put trade at the heart of his presidential campaign, vowing to disband Nafta, which he denounced as “the worst deal ever”.

Among the key differences between USMCA and Nafta are a requirement that cars must have 75 per cent of their components manufactured in Canada, Mexico or the United States in order to qualify for zero tariffs, compared to 62.5 per cent at present.

Similarly, by 2023, cars must have 40 per cent of their work completed by workers earning at least $16 (€14) an hour – an effort to allow American manufacturers to compete with cheaper Mexican labour.

In a setback for Canadian farmers, their country’s negotiators have opened up their market to US milk.

Canadian prime minister Justin Trudeau pledged to address farmers’ concerns by coming up with adequate compensation for those affected and protecting the supply management system.

Despite pleas from Canada, the US is maintaining its recently-introduced tariffs on steel and aluminium, though Canadian foreign minister Chrystia Freeland said it would continue to push for the tariffs to be lifted.

Mr Trump said during his press conference that the agreement would transform North America back into a manufacturing powerhouse. “We are not going to allow our steel industry to disappear,” he said.

Mr Trump praised Mr Trudeau, despite previously criticising his Canadian counterpart. He said that, despite what he termed “strong tensions” between the two during the trade talks “he’s a good man and he’s done a good job, and he loves the people of Canada”.