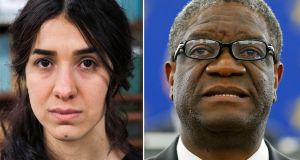 Two leaders of the struggle against sexual violence in war have won this year’s Nobel Peace Prize, a choice that will hearten campaigners fighting for greater recognition of a grave but long-neglected problem, and may also bring hope to victims worldwide that their suffering has at last been recognised.

The Norwegian Nobel committee said on Friday that Denis Mukwege, a doctor in the Democratic Republic of the Congo, and Nadia Murad, a 25-year-old Yazidi activist, had been awarded the prize “for their efforts to end the use of sexual violence as a weapon of war and armed conflict”.

Dr Mukwege (63), has spent decades caring for victims of sexual assault in his homeland. Murad has used her own story of enslavement and rape by Islamic State to publicise human rights abuses.

Both had “put their own personal security at risk by courageously combating war crimes and securing justice for victims,” the committee said. Mukwege was in surgery when he heard he had won the peace prize. “I can see in the faces of many women how they are happy to be recognised,” he said.

The choice has been universally applauded. Some recent awards have been controversial: the former US president Barack Obama won in 2009 after less than a year in office, and the European Union won in 2012. Last year’s winner was the International Campaign to Abolish Nuclear Weapons.

The committee said: “Both laureates have made a crucial contribution to focusing attention on, and combating, war crimes. Denis Mukwege is the helper who has devoted his life to defending these victims. Nadia Murad is the witness who tells of the abuses perpetrated against herself and others.

“Each of them in their own way has helped to give greater visibility to war-time sexual violence, so that the perpetrators can be held accountable for their actions.”

Dr Mukwege, a gynaecologist, founded and maintains the Panzi hospital in Bukavu, in the east of the DRC, where he has cared for tens of thousands of women who suffered sexual assault in the country’s recurrent civil conflict. He survived a kidnapping attempt in 2012 but has continued his work.

The committee described him as “the foremost, most unifying symbol both nationally and internationally of the struggle to end sexual violence in war and armed conflict”.

Ms Murad was abducted with other Yazidi women in August 2014 when their home village of Kocho in Sinjar, northern Iraq, was attacked by the Islamic State terror group. Captured alongside her sisters, she lost six brothers and her mother as the extremists killed the village’s men and any women considered too old to be sexually exploited.

Watch the moment the 2018 Nobel Peace Prize is announced.

She eventually escaped and had shown uncommon courage in repeatedly recounting her own sufferings and speaking up on behalf of other victims, the committee said.

Ms Murad is the second youngest Nobel Peace Prize laureate after Malala Yousafzai, who was 17 when she won in 2014.

The announcement was welcomed by prominent campaigners and organisations. “Well deserved and long awaited Nobel recognition of the fight against sexual violence in war, said Kenneth Roth, the executive director of Human Rights Watch.

Jan Egeland, the secretary general of the Norwegian Refugee Council, said he had first proposed Dr Mukwege for the award 10 years ago. “The best Nobel Prize in a long time. Finally focus on horrific & widespread sexual violence in war. Must lead to action against impunity for perpetrators & preventive action within armies & militias,” Mr Egeland tweeted.

A spokesperson for German chancellor Angela Merkel, herself tipped as a potential laureate, said she had great respect for the work of both winners.

Ms Murad moved to Germany in 2015 as part of a special programme for female victims of violence and met Dr Merkel in 2016 to discuss her work helping others.

“We will continue to work with Dr Mukwege and his team, as well as Nadia Murad, towards a world in which sexual violence as a method of warfare is abolished and survivors receive the care they need,” it said in a statement.

The government of Iraq recognised Ms Murad’s courageous campaigning on behalf of victims of sexual violence during conflict.

Authorities in the DRC have congratulated Dr Mukwege, while acknowledging that relations have been strained over the years. Dr Mukwege in the past has criticised the government and accused its troops of a culture of sexual violence.

Lambert Mende, the minister of information, said that Dr Mukwege had done “remarkable work” treating victims of sexual violence during years of conflict in the country’s east.

Mr Mende said “we have not always been in agreement”, adding that Dr Mukwege has had a tendency to “politicise” his humanitarian work. However, he said: “We salute that a compatriot is recognised.”

Dr Mukwege, the son of a pastor, trained as an obstetrician in France. The first patient treated in the maternity clinic he founded was a rape survivor. Over two decades later, his Panzi Hospital has treated more than 50,000 women and girls.

As well as physical treatment, Dr Mukwege created an approach that focused on providing psychological and socioeconomic support to the survivors, as well as founding a legal programme to help them obtain justice.

Beginning in 2013, he and his team had to care for dozens of young girls from the town of Kavumu who were taken from their beds and raped by a militia led by a provincial member of parliament who believed raping children would protect them from their enemies.

This year, 216 individuals and 115 organisations were nominated for the prize. They included the Syrian civilian aid group the White Helmets, Russia’s Novaya Gazeta newspaper, the US whistleblower Edward Snowden and the UN high commissioner for refugees. The 2018 prize is worth just over a million dollars.

One recent controversy has involved Aung San Suu Kyi, who won the award for her fierce resistance to the repressive junta in Myanmar. She has recently been criticised for failing to act to stop violence directed at the country’s Rohingya Muslim minority.

The potential winners touted by bookies this year included some divisive names: Kim Jong-un and Monn Jae-in were among the favourites (jointly) for their steps towards rapprochement between North and South Korea, followed by Donald Trump, for the same reason. – Guardian

1 Coronavirus: Government to extend restrictions for at least two weeks
2 Coronavirus: More ‘striking’ evidence BCG vaccine might protect against Covid-19
3 Chief medical officer urges people not to visit hardware stores
4 Growing hope in Government of partial easing of restrictions after May bank holiday
5 Coronavirus: Ireland will have to ‘live alongside the virus’
Real news has value SUBSCRIBE