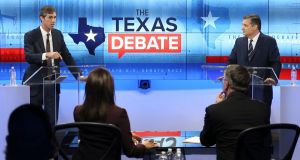 Beto O’Rourke, who is taking on Ted Cruz for his senate seat, is one of ActBlue’s most high-profile clients. Photograph:Tom Reel/San Antonio Express-News/Pool via Reuters

A 30-minute drive northwest of Boston, Massachusetts, in the leafy suburb of Somerville, lies the headquarters of ActBlue. This non-profit organisation, located in a mundane building on a regular suburban street, has become a powerhouse of the Democratic Party’s efforts to win control of Congress in the US midterm elections.

“I think there is an excitement this year from candidates who are running for election, who want to change the country, but also from donors,” says Hannah Brown, head of marketing at ActBlue, as she shows me around the office. “We raised $781 million through our platform for the entire 2016 election cycle – that included 2015 and 2016. Now we’re already at $1.4 billion.”

ActBlue was established in 2004 by two politically-minded science graduates from nearby Harvard and MIT universities. As the internet developed, so too did the platform. “Candidates started using our tools to fundraise, and activate this whole new group of people who wanted to donate, while also making it easy and accessible for small donors to give,” says Brown.

While ActBlue remains independent from political parties, it became a major fundraising tool for the Democratic Party and progressive candidates. Barack Obama was an early adopter of the service, while Bernie Sanders used it in his 2016 presidential campaign.

This election cycle some of the Democratic Party’s best-known figures have tapped into ActBlue’s infrastructure.

Conor Lamb, the Pennsylvania Democrat who unexpectedly won a special election in a Republican-heavy district in May, used ActBlue to reach small donors. Like many up and coming Democrats he rejected money from corporations and political action committees, the so-called PACs which pool large donations and have traditionally played an outsized role in shaping US elections.

Beto O’Rourke, the 46-year-old congressman who is taking on Ted Cruz for his Senate seat in Texas, is one of ActBlue’s most high-profile clients. His official Beto for Senate website sends users directly to ActBlue where they can make small donations within seconds. He raised an astounding $25 million through the organisation this year, including $11 million in July and August.

While ActBlue’s premises might be unassuming, inside the atmosphere resembles a typical tech start-up.

People in their 20s work quietly in front of their screens, LCD monitors display platform traffic and incoming contributions, while pictures of Obama and Hillary Clinton adorn the wall. The company employs about 75 people as well as a steady stream of interns.

According to Brown, the average contribution is $35, though crucial to its fundraising model is the fact that most are recurring donations. She has also seen an increase in women’s engagement with the platform – a hint perhaps of the important role female voters and candidates could play in this year’s elections.

“In 2014 approximately 52 per cent of our users were women, in 2016 the figure was 54 per cent, so far in the 2018 cycle that figure is 61 per cent,” says Brown. Similarly, in terms of candidates, women running for office this cycle have brought in 10 per cent more first-time donors than male candidates have on average.

ActBlue’s story is part of a broader swell in financial support for Democrats that is putting the party well ahead of Republican rivals, leaving it in a strong position ahead of the elections on November 6th.

Figures released this week by the Federal Election Commission (FEC) reveal that Democrats have raised a record-breaking sum this year. Democratic candidates running for Congress collectively raised more than $1 billion for their campaign. It is the first time since 2008 that Democratic candidates for both the Senate and House of Representatives have outraised Republicans. Some of this reflects the impact of small donations. About a fifth of the total funds raised was from donations of less than $200 – a trend that Republicans have not been able to replicate to the same extent.

Republican candidates don’t have a centralised platform to rival ActBlue; ActRight was an initiative that offered a conservative alternative but failed to catch on. Instead Republicans are mostly relying on direct mail and social media to solicit smaller donations.

In some of the country’s toughest battlegrounds, individual Democratic candidates are vastly outperforming Republicans in terms of funding. In Missouri, Claire McCaskill, the Democratic Senate incumbent who is facing a tough challenge from Republican Josh Hawley in a state that voted for Donald Trump, raised almost $30 million in the year to date, compared to $8.5 million raised by her opponent.

Similarly, O’Rourke has dramatically outraised Cruz, bringing in more than $60 million to date. In the third quarter he raised three times as much as Cruz.

Whether Democrats’ well-filled coffers will translate into electoral success remains open to question, however, as Republicans take heart from an expected uptick in voter engagement as a result of Trump’s ultimately successful nomination of Brett Kavanaugh to the supreme court.

Much of the money raised by O’Rourke, for example, came from outside his state, suggesting that the wave of enthusiasm behind him may have limited impact on voters in Texas.

Similarly in Missouri, McCaskill is fighting a tough battle against Hawley with the two candidates neck-in-neck in the polls, despite her campaign spending heavily on advertising in an increasingly bitter campaign fight.

While Democrats’ renewed financial muscle has put a spring in the party’s step ahead of election day, separate figures released this week show the need for caution.

Republicans may be trailing their Democratic rivals when it comes to fundraising, but Trump has been amassing a war chest when it comes to his 2020 re-election campaign. The FEC filings show that he has passed the $100 million mark in terms of fundraising since January 2017, more than any other president since Ronald Reagan at this point in his presidency.

Many of his donations come from small donors, suggesting that his grassroots campaign will continue to work for him in the 2020 cycle.

Whatever the outcome on November 6th, Democrats could face an even bigger challenge in the coming presidential battle, as Trump embarks on his quest for a second term.