Democrats should learn from Mitch McConnell – even as they abhor him 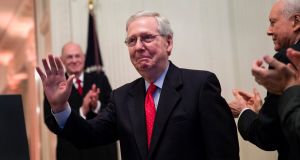 Senate majority leader Mitch McConnell receives applause at a White House ceremony on Monday to mark the swearing-in of Brett Kavanaugh as a justice of the US supreme court. Photograph: Samuel Corum/New York Times

Mitch McConnell’s ever-startled face could have been drawn by the cartoonist Tex Avery. The majority leader of the US Senate also does a vivid line in Southernisms: his support for Brett Kavanaugh, whom he navigated on to the supreme court, was as “strong as mule piss”.

And there, his outwardly interesting characteristics end. Grey of hair and persona, the distinguished side of 70, McConnell blends into the collage of Republican life so well that you wonder if a country club is missing its chair of governors. His indistinctiveness allows the craftiest politician in the land to work in relative stealth.

And to nation-changing effect. With a one-seat margin in the Senate, he has populated the judiciary with conservatives, secured the highest court for the right and passed an improbable tax cut. He fleeced Barack Obama of his last supreme court nominee and changed the rules to install Donald Trump’s first by a bare rather than super majority.

For Democrats, McConnell is cynicism in human form. Another word for it is politics

He survived the Tea Party’s cull of mainstream Republicans, as well as low approval ratings in his own Kentucky. His passage from state-level moderate to operational arm of Trumpism has been bourbon-smooth. This summer he became the Senate’s longest-serving Republican leader.

On Monday, two years after he refused, on principle, to confirm a justice in an election year, he said that one could be confirmed in 2020, proving once more that unembarrassability is the trick to political survival.

For Democrats, he is cynicism in human form. Another word for it is politics. The left should learn from McConnell even as it abhors him. With its command of Hollywood, academia and other weather-setting industries, it has come to regard practical politics as distasteful, or at any rate optional.

Its current darlings are leftwingers – Bernie Sanders, Elizabeth Warren – or such charismatic performers as Senator Cory Booker. Even Nancy Pelosi, a supple tactician in her time, who navigated Obamacare through the House of Representatives, is cherished more as a believer in things.

Democrats will sigh that, yes, they are just too civilised for their own good. The party of Tammany Hall and Lyndon Johnson should avoid such self-regard. Chuck Schumer, McConnell’s opposite number, set himself against Kavanaugh as soon as he was nominated. The triangulating Clintons were no rubes.

It is the developing trend of the party, not its record, that suggests a certain innocence. Among its Washington corps of politicians, fewer and fewer are masters, as McConnell is, of procedural arcana. What knavery it used to have was often learnt in the unions. The tone of the party is now set by younger and more educated activists who treat politics as a matter of first principles, not mechanisms – as a cause, not a craft.

For all that Democrats fear Trump, the GOP has but one of him. It has little McConnells everywhere. Diligent cadres at state and local level work to eke out partisan advantages in electoral boundaries and voting rules. In next month’s midterm elections, Democrats will need a handsome win in the popular vote to take the House.

This is down to their voters’ geographic distribution, but also to lost duels over map-drawing in back rooms and town halls at the start of the decade. Before it is a shining city on a hill, the US is an excruciating thicket of rules and processes. It rewards attention to detail and a patience for grunt work. It is unforgiving to dreamers.

In It’s Time to Fight Dirty, David Faris, a political scientist at Roosevelt University, says that Republicans have for decades used ambiguities in the constitution to rig politics in their favour. Democrats cannot bank on an oblivious electorate to punish them. Instead of waiting for justice, he wants the party to dispense with Marquess of Queensberry rules itself.

His analysis is too kind to the Democrats. His ideas, which include court-packing and the dismemberment of California to yield more senators, are too brazen: it is precisely the abstruseness of Republican tactics that allow them to pass undetected. But his ultimate insight – into a worldly right, and a guileless left – is becoming truer with time.

After November, Democrats will comb their ranks for a leader who can “connect” with voters in 2020, as if that has been their failure all this time. Their presidential candidate has lost the popular vote only once since the end of the cold war. The party’s problem is not a lack of mass appeal. The problem, as McConnell might put it, is that it knows less about politicking than a hog knows about Sunday. – Copyright The Financial Times Limited 2018