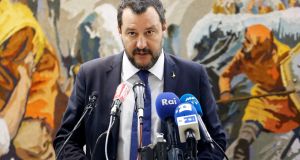 Italy’s far-right interior minister, Matteo Salvini, has been forced to drop his support for a controversial policy in a northern city that saw children of immigrants pay more for school lunches than their Italian counterparts.

The minister came under pressure after a crowdfunding appeal raised €60,000 within a few days to fund school lunches for the children of mainly African migrants in protest against a resolution passed by Sara Casanova, the mayor from Salvini’s League party in the Lombardy city of Lodi, that in effect forced them to eat separately.

The edict had obliged parents to declare their assets, in Italy and their countries of origin – a difficult if not impossible request for those coming from African countries – in order to qualify for the standard cost of meals.

Failing to provide the asset details meant they had to pay the highest rate of €5 per child, and with migrants constituting the poorest people in the city, many could not afford to do so. Families were also required to pay €210 per child each quarter for the school bus.

The resolution meant that for two weeks, more than 300 children were in effect excluded from school canteens across the city and forced to dine at home.

Activists and leftwing politicians attacked the resolution, with a senator from the centre-left Democratic party, Simona Malpezzi, describing it as “apartheid”.

The aid group Co-ordination of Equal Duties launched a crowdfunding campaign that saw Italians across the country rally to raise €60,000 to ensure school lunches and bus rides for children affected by the resolution.

Amid the outcry, Mr Salvini relinquished his support for the move, writing on Facebook that “a self-certification of assets” would be enough to guarantee school meals for the children of foreigners.

He also came under pressure from his government coalition partner, Luigi Di Maio, leader of the populist Five Star Movement, who praised Italians’ generosity and said “no child should be harmed”.

In spite of the pressures from the government and the protesters, Ms Casanova has insisted she will not go back on her decision. Although she is likely to accept the self-certification, the resolution will not be dismissed, she told reporters.

The former prime minister Matteo Renzi described the resolution as a “national disgrace”.

‘‘Seeing children discriminated against in the school canteen for economic reasons hurts the heart,” he wrote on Twitter. “Politics based on hate and fear generates monsters.” – Guardian