Trump’s war on Obamacare has backfired on Republicans 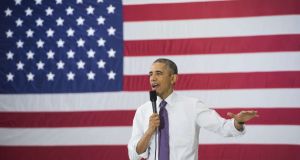 The then US president Barack Obama speaks about the Affordable Care Act in Nashville, Tennessee, on July 1st, 2015. Photograph: Saul Loeb/AFP/Getty Images

The Oscar for slickest use of violence in a political advertisement goes to Senator Joe Manchin of West Virginia. In a scene that evokes the target practice in The Day of the Jackal, the rifle-bearing Democrat shoots to tatters a “dead wrong” lawsuit against Obamacare. The method is West Virginian. The sentiment is national.

Eight years after it cost them in midterm elections, four years after it did so again, Democrats are running to protect the Affordable Care Act, or bits of it, from Republican menaces. It edges resistance to President Donald Trump as the party’s central offering in next month’s midterms.

Before you despair of these electoral masochists, consider the fluidity of public opinion. Obamacare still polarises but, in a reverse of the numbers in 2014, it is now backed by 50 per cent of Americans to 40 per cent. There are super-majorities for some of its features: insurers, for example, cannot refuse people with existing ailments.

Once-proud enemies of the reform scrub mentions of the fact from their candidate websites. Voters put healthcare at or near the top of their concerns and trust Democrats to manage it by larger margins than usual.

Were they to study Obamacare’s reputational convalescence, economists would diagnose a textbook case of loss aversion. Once established, people favour a present good over the theoretical prospect of something better. As such, the Republican vow to “repeal and replace” could not have been worse phrased. It also tacitly granted the act some merit: no innately bad idea needs “replacing”.

When repeal failed in the Senate last year, Republicans could have spent their energies elsewhere. Instead, they gnawed at the various schemes through which Obamacare widened access to healthcare. The least liked of these, which nudged individuals to buy cover on pain of taxation, was cancelled to no great fuss. The fool’s errand was to pick other, less winnable fights: against the expansion of Medicaid, against the lavishly popular existing conditions rule.

The result is that millions of voters reach apprehensively for their wallets when Republicans mention healthcare. Americans do not love the ACA. They resent the complications it adds to a surreally baroque health system. They shiver at memories of its teething pains. Some Democrats avoid referring to the reform by either its official or vernacular names.

Once Republicans began to undo it, however, its reputation stabilised, then recovered. Few policies have passed from infamy to acceptance in under a decade. Fewer still with the help of their would-be abolitionists.

How strange that this of all presidents made the unforced error. In 2016, when Trump beat free-market Poindexters to the Republican presidential nomination, he intuited that many Americans now count on the state. Whatever his geopolitical heresies, this interloper had domestic instincts in common with Dwight Eisenhower, who swallowed the New Deal; Richard Nixon, who accepted the Great Society; and George W Bush, who enlarged Medicare.

The exception to Trump’s pragmatic streak was his war on Obamacare, rooted as it was in disdain for the first three syllables of that word.

It has not served his political interest. Nor did the tax cut of last December: another Tea Party-ish idea that electioneering Republicans now play down. Trump’s political problems often come from these lapses into the GOP’s joyless doctrine of eternal supply-side reform. He was elected to crush it.

American conservatism is in awkward, fitful transit from one set of beliefs to another; from Chamber of Commerce orthodoxies to what Steve Bannon, Trump’s former aide, calls “economic nationalism”. Even voters who would not use his brute phrase are drawn to the implied openness to state intervention. This need not constitute the end of the republic.

In a much older video, Manchin vows to get the government “off of our backs”. Lots of voters now want the opposite. There is support for a mildly redistributive, risk-pooling state that stops well short of socialism. Sensing this, some Democrats now call for “Medicare for all” and other audacious, if imprecise, advances on the ACA.

Such ideas – in truth, slogans – are popular. This is jarring to some conservative ears. It is easier to idealise their compatriots as government-shunning mavericks, chins jutted towards the frontier. But a nation does not have an immutable character. Voters began the decade with as much distaste for Obamacare as Republicans felt. The right ignores the passing of that moment at its own electoral hazard. – Copyright The Financial Times Limited 2018